I couldn’t make this stuff up.

In response to ex-congressman J. D. Hayworth’s angry rant (on his NewsMax television “America’s Forum”) show about how Muslims are striving to impose sharia law on Minnesota’s good ol’ Christian boys, Ralph Reed observed that “bigotry against evangelical Christians is the last acceptable form of bigotry.”

Seriously. He responded to a litany of bigoted stereotypes about Muslim Americans by bemoaning how awful it is when people hold bigoted views about Christian fundamentalists. 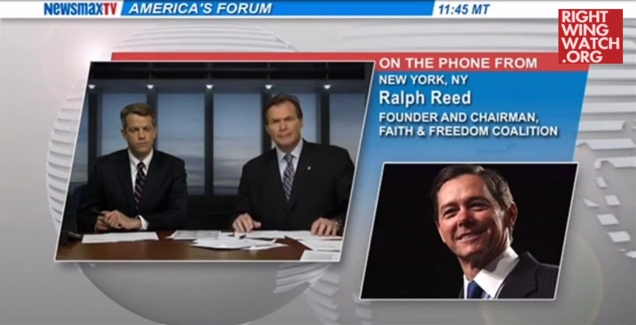 These are the same Christian fundamentalists who want to enshrine in law a Christian’s right to exclude anybody they don’t like from participation in commerce or public discourse, essentially making bigotry a fundamental right as long as it’s religion-based. It’s discrimination if Christians can’t discriminate! And let’s be clear — these laws are able to gain political traction precisely because they are based on evangelical Christianity; no other religion in America has the same political clout.

And who could forget his insistence that A&E deserved to be boycotted for censuring Phil Robertson of Duck Dynasty fame? Which is another way of saying, “It’s not fair how other people had opinions about what Robertson said and his employers responded to that.”

So let me get this straight, Ralph Reed: bigotry is bad… unless it’s right-wing, Christian bigotry. That’s the good kind of bigotry!

March 20, 2014
Sen. Ted Cruz Is Now Wrongly Claiming He 'Won' the Case to Keep 'Under God' in the Pledge
Next Post