Former ‘Two and a Half Men’ Star is Now a Spokesperson for Jesus March 19, 2014 Hemant Mehta

The last time we heard from Angus T. Jones, the “half” in “Two and a Half Men,” he was making about $300,000 per episode but ready to throw it all away because he was morally opposed to the show’s plotlines, which went against his Seventh-day Adventist values.

It wasn’t all that different from what happened with Kirk Cameron during his Growing Pains days after he became ultra-religious:

Once he converted to Christianity, he sometimes clashed with his fellow cast members and the show’s producers over what he felt were immoral story lines.

Now, a year after leaving the show, Jones is back in the spotlight. He recently spoke at World Harvest Outreach Church in Houston about how he found God: 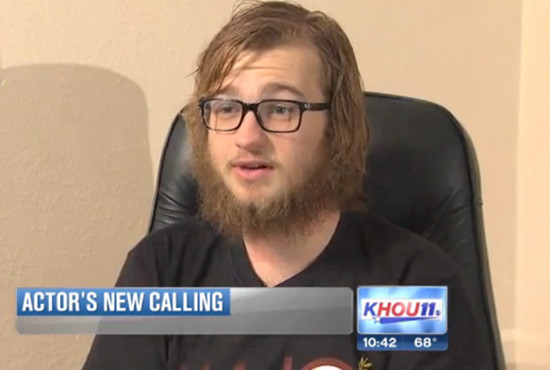 “It was difficult for me to be on the show and be part of something that was making light of topics in our world where there are really problems for a lot of people,” said Jones. “I was a paid hypocrite because I wasn’t OK with it and I was still doing it.”

“I really want to come into the light because I know that is where the healing is and I’ve seen God do amazing things,” said Jones.
He may have put acting on the back burner for now, but he hasn’t completely ruled it out.

“There’s a few different productions that like do kind of Bible-based stories. Stuff like that,” said Jones.

You know, if the problem with the show was that it offered an unhelpful approach to real-world problems, church is probably the last place you want to be…

In any case, I don’t begrudge him his newfound path. I worry, though, that he’s gone from a life of a child actor, where you’re constantly managed by people you hope you can trust but who may have ulterior motive$, to a life where he may be getting duped by the very people he’s come to trust as an adult.

(Thanks to Gabriela for the link)

March 19, 2014
Fight Against Polio is a Foreign Cause for Muslim Anti-Vaxers; Assaults on Vaccination Teams Also Cost Kids' Lives
Next Post