It’s Been 14 Years Since the Mass Murder/Suicide of an African ‘Ten Commandments’ Cult That Took 788 Lives March 18, 2014 Terry Firma

Most people have at least a passing familiarity with the 1978 Jonestown massacre. But few remember the remarkably similar events that made headlines 14 years ago today, a continent away, in Kanungu, Uganda.

Close to 800 people perished, and maybe more — some 530 of them in a locked church that was set ablaze. The rest were stabbed, strangled, beaten, and very likely poisoned to death.

The carnage was the handiwork of an all-black Christian doomsday cult that had split off from the Roman Catholic Church, and that called itself the Movement for the Restoration of the Ten Commandments of God, or MRTC. (Note: We’ll have to assume that “Thou Shalt Not Kill” had somehow been temporarily suspended when the cult members murdered their prey.)

From the get-go, in the late eighties, the Vatican wanted nothing to do with the group, but the MRTC was nonetheless based on Catholic doctrine: members venerated Catholic icons, and the leadership consisted predominantly of defrocked priests and nuns, some of whom claimed to frequently see apparitions of Mother Mary. At the peak of their influence, they managed to attract around 5,000 members. 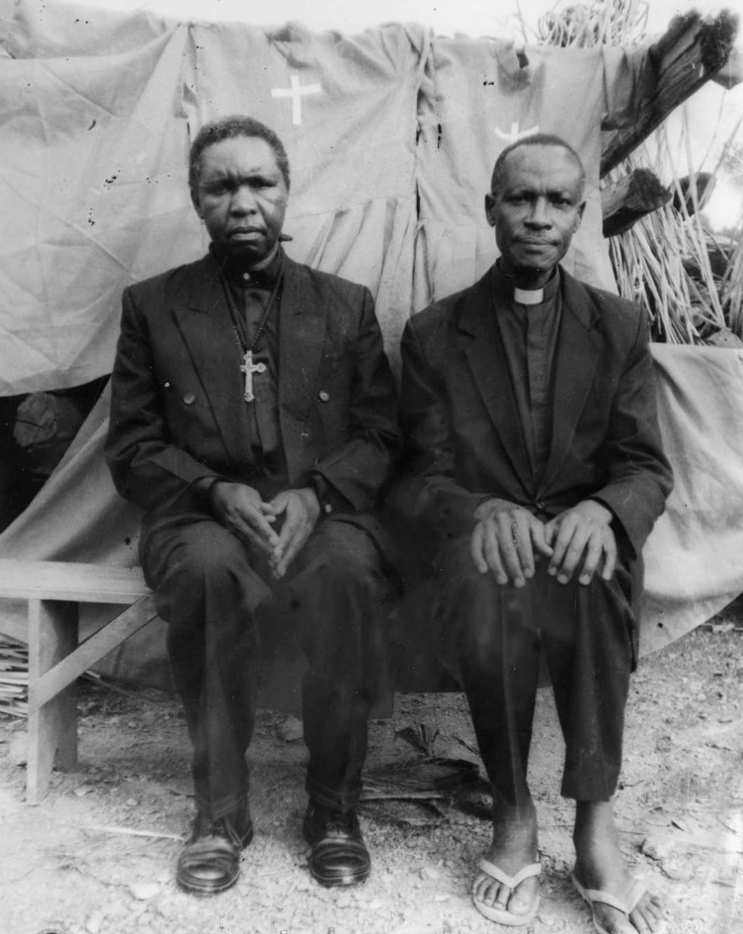 Followers’ dedication to the Decalog was obsessive:

The emphasis on the Commandments was so strong that the group discouraged talking, for fear of breaking the Ninth Commandment, “Thou shalt not bear false witness against thy neighbor,” and on some days communication was only conducted in sign language.

Not content with life on earth, an existence the MRTC regarded as inherently sinful, the group soon adopted an end-times philosophy. Its leaders, Joseph Kibweteere (above, left) and Credonia Mwerinde, announced that God would destroy the world on the first day of the year 2000. Kibweteere even said he would travel to Europe to commission a giant ark, just like Noah’s, but nothing came of the purchase.

When the millennial changeover drew near, inevitably,

Clothes and cattle were sold cheaply, past members were re-recruited, and all work in the fields ceased.

And just as inevitably, January 1 came and went without celestial annihilation. So the leaders asked God for a new date of doom; and the Almighty, an obliging fellow, promised them it would be March 17, 2000, for real.

This time, the MRTC, taking no chances, decided to jumpstart the apocalypse on the designated day. In fact, the end came even sooner for hundreds. In the weeks leading up to the end of the world, group members slaughtered former followers and others who were deemed insufficiently loyal to the cause.

On the day that Jesus would finally take the cultists to the hereafter, about 530 MRTC members shuffled into their large makeshift church in Kanunga — some voluntarily, others probably under force. Then the doors were locked, a horrifying pandemonium ensued as the believers doused themselves and each other with paraffin and gasoline… and the rest is history.

Soon after the fire burned out and while the ruin still smoldered, says a Ugandan source,

Yet another 494 bodies would be found … under the cult’s buildings in Buhinga, Rutoma and Rukungiri. Other buildings and mass graves were found at Rugazi, Bunyaruguru, Rushojwa and Buziga in Kampala.

[Pathology] reports showed that many of the victims were clubbed, strangled or hacked to death. It was also believed that some of them could have been poisoned.

Wikipedia adjusts the total death toll downward to 778, although it’s likely that some corpses were never found. Also, the Ugandan government, which provided the final number, may have been inclined to underreport the body count so that the tragedy wouldn’t be seen as “worse than Jonestown” (where 908 people perished).

No cult leaders are known to have survived, but Ugandan investigators aren’t sure of it. There is some evidence that Mwerinde got out alive and went into hiding. A warrant for her arrest is still in effect 14 years later, as it is for Kibweteere.

(Photo from the Kanungu archive of Richard Vokes)

March 18, 2014
The History of the Westboro Baptist Church: Onion Edition
Next Post