Blood Drive: After Crashing Into Church, God-Besotted Woman Stabs Her Husband at Altar for ‘Worshiping NASCAR’

On Sunday, like millions of Americans, Tennessee resident Stephanie Faye Hamman drove to church. The reason you’re reading about it is that she deliberately kept on driving when she got there — crashing right through the double doors.

Ms. Hamman could have walked; the church is across from the apartment she shares with her husband, Steven. But something — God, she said later — told her on Sunday evening to grab a knife, get in her Toyota Celica, drive through the church entrance, lay down by the altar, call her husband, and wait for him to arrive. And then: 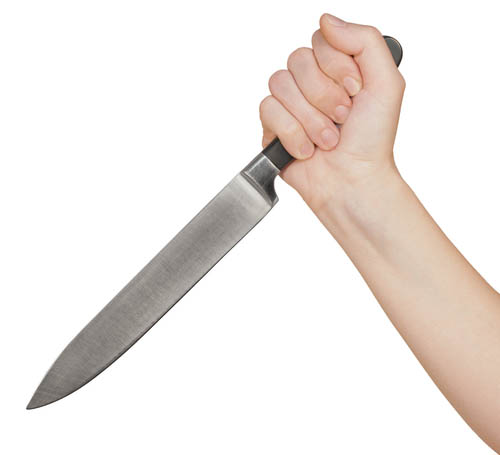 Mr. Hamman stated he found his wife lying in front of the altar, and as he checked on her, she stated, ‘The devil is in me’, and stabbed him on the right side of his chest with a large kitchen knife, [police chief Mark] Johnson said. “Mr. Hamman stated he pulled the knife out of his chest and fled the scene. He went back to the apartment where he waited on police and EMS assistance.”

As for a motive, Stephanie Hamman, after she was arrested, told police that

… she felt her husband Steven was worshiping the NASCAR race at Bristol [race track], which made her mad, and she began having thoughts that the devil put in her head.

There are unconfirmed reports that she had been baptized on Sunday morning, which may or may not be relevant.

Among Stephanie Hammans’ statements to the police:

“I smoke a bunch of weed. I love to smoke it. Sometimes when I do, I start seeing things that others don’t. Isn’t God good? He told me that this would happen, and just look, I am OK.”

“So God told me He wanted me in there, so I drove my car through the front doors. God told me to, so I did it.”

“After I drove through the doors, I put all the things I brought to the church at the altar. I called Steven and told him I had wrecked. I laid down in front of the altar until he got there. The devil told me to take the kitchen knife with me. I prayed I would not have to use it on him, but I did.”

“When Steven came to check on me, I told him the devil was in me and I stabbed him in the heart. Have you heard if he is dead or not?”

He isn’t. He’s in the hospital, where he is reported to be in fair condition. Stephanie Hamman, charged with attempted first-degree murder and felony vandalism, will be arraigned tomorrow.

(Thanks to Matthew for the link. Image via Shutterstock)

March 18, 2014
A Decade Later, This is the 500-Page Creationism Book a Public School Biology Teacher Gave His Students
Next Post