Perhaps the New York Daily News needed to fill its daily quota of oy-I’m-kvelling human-interest stories. How else to explain this opening paragraph?

It was a gift from above, miraculously recovered from the ruins below. A decades-old Bible from the ravaged Spanish Christian Church was pulled from the East Harlem gas blast rubble by firefighters, an incredible find amid the carnage on Park Avenue.

“The Word was preserved,” said the Rev. Rick Del Rio of Abounding Grace Ministries, who turned out for a Saturday prayer service on 116th St.

That’s fantastic. A copy of the most common book in the world was saved (although I can appreciate that this specimen was special to the congregation, dating back to the church’s founding some eighty years ago) — but eight people lost their lives, more than sixty residents got injured in the explosion, and more than a hundred people were displaced. Praise God!

Oh, the Almighty almost killed another person — after the good book was found in the rubble.

The Rev. Thomas Perez was overwhelmed to learn that the church’s venerable Bible had emerged from the ashes. The pastor was taken to Mount Sinai Medical Center as a precaution after he complained of chest pains before the Saturday prayer service.

Quality newspapers like the Denver Post and TV outfits like CNN also reported on the non-story of the Bible rescue, elevating it to headline status — but at least they didn’t slather it in piety sauce the way the Daily News did.

The Bible in question is now singed and water-damaged, by the way (the Daily News has a close-up photo). So God doesn’t seem to have been on his A-game.

Why did the book survive? It has to do, in large part, with the density of tightly packed paper. A few years ago, Slate explained why books (especially closed ones) are actually pretty hard to burn without an accelerant — or even with one.

It’s extremely challenging to ignite a closed book, even with repeated applications of lighter fluid. You may char the edges, but the flame that results will never grow large enough to consume an entire volume. For any chance at a sustained burn, it’s necessary to open the offending book and fan out the pages as much as possible, so as to promote the circulation of air and heat exchange.

At the end of 2010, the home of two of my friends burned down; the next day, it was a blackened, smoldering mess inside and out. I took photos of the fire’s aftermath, like the one below, and wasn’t too surprised to see that many of their books had been singed, the spines badly charred, but not destroyed beyond the point of readability: 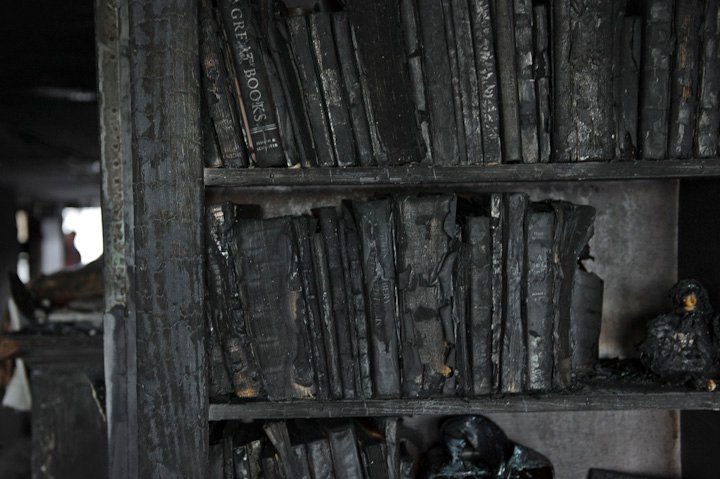 Granted, those are pretty tightly-squeezed-together volumes. Isn’t it a little bit of a miracle if a book is out by itself, the way the New York Bible presumably was, and it doesn’t get consumed in a raging fire?

Sorry, no. It may be the opposite:

Why can you burn 100 closed books, but not one by itself? To sustain a fire, you have to get the outside of the book up to ignition temperature and keep it there. But two things happen when you apply flame to a book. First, heat is shunted into the middle of the volume, which prevents the outside from reaching ignition temperature. … Second, a layer of char develops on the book cover, which serves to raise the ignition temperature. So, if you want to keep your books burning, you have to apply continuous heat to the surface by surrounding them with other burning books. That’s why it’s so hard to burn a single log in your fireplace — without new heat coming in from adjacent burning wood, the energy dissipates and the fire dies.

We should also take into account that firefighters were on the scene of the New York blast in under five minutes, their number soon rising to about 250. That’s a pretty formidable, admirably fast response, which helped keep the fire damage down.

Call me cynical, but it seems to me that the combined brawn of those engine and ladder companies did a helluva lot more to (accidentally) save the Bible than the Lord did.

March 17, 2014 When Fred Phelps Dies, Let's Do Nothing
Browse Our Archives
What Are Your Thoughts?leave a comment