Fred Phelps, Founder of the ‘God Hates Fags’ Westboro Baptist Church, is on the ‘Edge of Death’ March 15, 2014 Hemant Mehta

Fred Phelps, Founder of the ‘God Hates Fags’ Westboro Baptist Church, is on the ‘Edge of Death’

You know Fred Phelps. You loathe Fred Phelps. You despise everything he stands for, like his family members’ infamous protests at soldiers’ funerals with their awful “God Hates Fags” signs. They’ve been a symbol for many years of the religion-based animosity against the LGBT community — to the point that they’ve been labeled a “hate group” and even the most fundamentalist Christian groups denounce his church’s activities.

Nate Phelps (below) is Fred’s son and a former member of Westboro Baptist Church. He left the church, and therefore the core of the family, in 1976 when he was 18 years olds and has since come out as an atheist, but he still keeps in touch with some of his extended family members, many of whom have also escaped from the church. 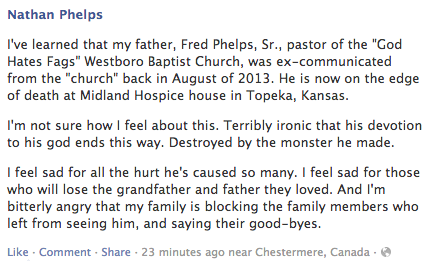 I’ve learned that my father, Fred Phelps, Sr., pastor of the “God Hates Fags” Westboro Baptist Church, was ex-communicated from the “church” back in August of 2013. He is now on the edge of death at Midland Hospice house in Topeka, Kansas.

I’m not sure how I feel about this. Terribly ironic that his devotion to his god ends this way. Destroyed by the monster he made.

I feel sad for all the hurt he’s caused so many. I feel sad for those who will lose the grandfather and father they loved. And I’m bitterly angry that my family is blocking the family members who left from seeing him, and saying their good-byes.

I just got off the phone with Nate and he confirmed what he had written. The rumors had been flying for several weeks, he said, but after a conversation with some of his fellow “excommunicated” family members, he found out that the rumors were true. He elaborated on that final line, too, saying that the Phelps family is now blocking anyone who is no longer with the church from seeing him, including Fred’s sons, daughters, nieces, and nephews.

Why was he kicked out of his own church? Did he have a change of heart near the end of his life? There’s no definitive answer to that and Nate has heard different things (so any explanation is pure speculation right now).

In any case, it appears that Fred Phelps doesn’t have much longer to live. While some may rejoice at that, Nate’s tone over the phone was anything but happy. He’s losing his father. A father who dedicated his life to spreading hatred and made the lives of so many others so miserable, but a father nonetheless.

What will become of Westboro without him? While I would like to say it’ll disappear entirely, that’s unlikely, at least in the short term. My guess is that Fred Phelps, mostly due to his age (he’s 84), hasn’t been an integral part of the church’s activities for quite some time. Those responsibilities have long been delegated to other members of the church, mostly to daughter Shirley Phelps-Roper. But without the founding figurehead in place, we can at least hope Westboro becomes less relevant and eventually obsolete.

If there’s any solace to be found in this story, it’s that many of Fred’s thirteen children and extended family members have escaped from his indoctrination — 20 of them have fled since 2004, according to one report, with three-quarters of them under the age of 30. It’s uplifting, in a way, to realize that even people who grow up under the most vile of belief systems can end up respectable and tolerant and kind and wonderful.

Indeed, several of those former church members, including Nate, are LGBT-rights activists.

As of now, there’s no mention of Fred Phelps’ condition on his church’s site, blog, or Twitter feed.

In the meantime, we’re all left debating whether it’d make a larger statement to picket his eventual funeral or ignore it and turn the other cheek.

March 15, 2014
Two Atheists Will Soon Debate the Historicity of Jesus
Next Post