This Police Chief is Using His Office to Promote Christianity and the Proof is Everywhere March 13, 2014 Hemant Mehta

Either way, I hope we can all agree that Birmingham, Alabama Police Chief A. C. Roper has crossed the line many times over. Roper has been a law enforcement agent for nearly three decades and he’s held the top post for seven years.

At the same time, he’s been working on a side project called Prayer Force United, “an organization of pastors, city leaders and intercessors from local churches providing a covering of prayer over the city of Birmingham.”

That alone wouldn’t be a problem. You can be a government official who also serves as a religious leader on the side. The problem is that Roper can’t tell the difference between the two worlds and he makes it sound like they’re the same organization.

In a promotional video for PFU, Roper explains how he’s working for Jesus — and suggests that the entire police force is behind him: 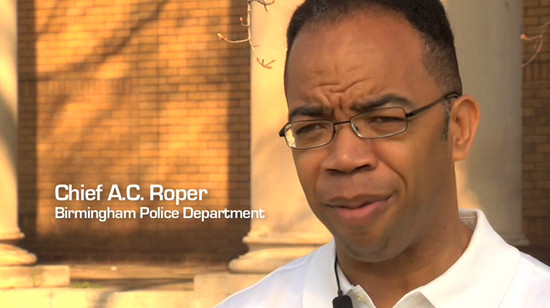 I believe one of the biggest problems that we’re facing as a city is a lack of godliness… We have turned away from the foundations and principles of God and, because of that, we’re seeing the breakdown of the family…

All that was said as Roper acts in his capacity as Police Chief.

The Freedom From Religion Foundation’s Andrew Seidel has written a letter to Roper explaining the illegal connections between the two groups — and filed an additional open records request to find out how much time, money, and resources have been spent by the police department (and, therefore, taxpayers) in order to proselytize.

We understand that a police cruiser leads these prayer walks with lights flashing, followed by a truck with a sound system that “cranks up some gospel music.” At the end, a “worship team [is] going full bore, just praising Jesus.” Then the “local pastor introduces the police chief,” and you then give a sermon invoking Jesus several times.

Even if you are maintaining appropriate constitutional boundaries with the financial aspects of Prayer Force United, something our records request will illuminate, the appearance of official government endorsement at these events is a violation. There is an official police cruiser escort, lights flashing; officers lining the route; you wear a BPD shirt featuring the BPD badge; you often wear your BPD badge on your belt; and in every news story, press release, publicity notice, and before every sermon you give, you are always introduced in your official capacity as Police Chief

Seidel’s just getting started. He also rebuts the false and harmful stereotype that a religious community is automatically a safe community:

The walks themselves may lower crime simply by having crowds on the streets escorted by police cars with flashing lights, but that is not because of the power of prayer — it is the power of people. Prayer cannot stop violence. Scientific studies show that societies with less prayer have less violence…

States that tend to be among the most religious in the nation:

We understand that you impose Christian prayers prior to any police department gathering. Non-Christian officers are either forced to “out” themselves by leaving the room or to suffer through the sacred rites of a religion not their own. Not only does this create serious division within your department, it is also illegal.

All Roper has to do to avoid a costly lawsuit is follow the law he has already sworn to uphold. But all he’s done so far is prevaricate, acting like everything he’s doing is interfaith and not just Christian, even though his own words and actions suggest the opposite:

“Obviously, it’s no secret that I support the prayer walks and many other faith based community events as one tool in our overall crime fighting strategy,” [Roper] said. “We have built strong partnerships with various groups and I believe they have done a wonderful job committing their assets and assisting us in addressing various issues that affect crime.

“Our department supports all types of groups and organizations as they walk and work in our communities,” he said. “We are and will continue to be extremely inclusive, including supporting interfaith events as we have in the past.”

In short, he doesn’t think he’s doing anything wrong and it’ll take a lawsuit to get him to see the light.

You can see a compilation of the argument against Roper here:

On a side note, my favorite part of the Prayer Force United website is this graph on the front page: 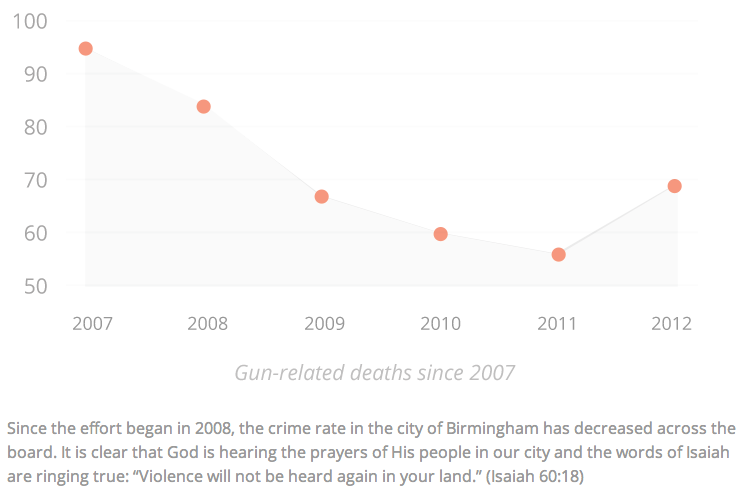 Look at how God is lowering the number of gun-related deaths! Oh, and by the way, just ignore 2012. God must have blinked that year.

By the way, it’s important to note that FFRF doesn’t send complaint letters on their own. They only take action when someone affected by the issue requests that they do something. Seidel told me that, in this case, the whistle was blown on Roper by one of his own employees.

So when the media or local commenters say this is just an outside group coming after a local cop, don’t believe it. This is an issue only because someone in the Birmingham Police Department had the courage to tell FFRF about Roper’s illegal actions.