If you’re a mayor, here’s a simple rule: Never use this as your salutation: 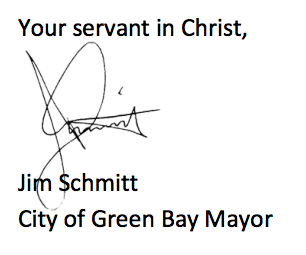 But “your servant in Christ” are the words Green Bay, Wisconsin Mayor Jim Schmitt used in a letter attempting to get the Pope to visit his city:

With this letter, it is my deep and personal honor to extend an invitation to you, The Sovereign Pontiff, His Holiness Pope Francis. During your visit to the United States for the World Meeting of Families in 2015, I invite you to extend your visit to the greater Green Bay community and make pilgrimage to the Shrine of Our Lady of Good Help.

The Blessed Virgin is an expression of the important bonds of family through the joining of herself with her maternal spirit to His sacrifice. We as a community are filled with a generous heart for having this connection to the Virgin Mary.

I’m not entirely opposed to the idea of inviting the Pope to Green Bay; as a world leader, I imagine a lot of mayors would want Pope Francis to visit their towns (though there are strong financial reasons against it). But surely a line must be drawn when it comes to writing a letter from the Mayor’s desk that reads like a devout fanboy instead of an elected official representing a diverse city.

The Freedom From Religion Foundation isn’t taking the issue lightly:

You were not elected bishop of Green Bay. As mayor you serve all Green Bay citizens — of any or of no denominations, including Jews, Wiccans, Hindus, Muslims and Protestants — and those who protest against all religions. You even signed mayoral letter, “Your servant in Christ.” The nonreligious now comprise up to a third of the U.S. population. A majority of Green Bay citizens do not consider the pope their “Holy Father.” Nor do they consider it the business of the mayor to promote a “pilgrimage” to a Catholic shrine. Nor do they believe there was a “Blessed Virgin Mary apparition,” even if it was “approved by the Catholic Church in the United States.”

The apparition bit refers to the idea that Mary, “ablaze in light and clothed in dazzling white,” allegedly appeared to a local woman in 1859. In his letter, the mayor requested that the Pope visit the site of that apparition, the Shrine of Our Lady of Good Help.

There’s also a website urging citizens to sign a petition in support of the Pope’s visit. Guess who it’s registered to? 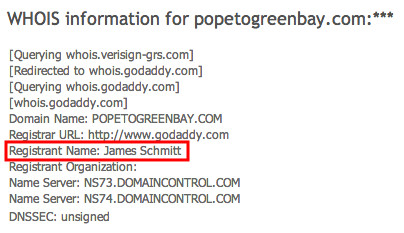 We don’t know if Schmitt did that in his personal capacity or if government resources were used to register the site.

Again, no one would raise a fuss about this if this was solely in his personal capacity. But it’s not. Schmitt is using his title and office to woo the Pope. If the Pope says yes, it’ll cost the taxpayers a hell of a lot of money, too.

FFRF has made an open records request to find out what government resources have already been used in trying to entice the Pope to visit Green Bay.

March 12, 2014
You Won't Believe How Much Money Was Stolen from the Largest Church in the U.S. After Weekend Services
Next Post