Anecdotes of a Church Being Changed (Maybe) by Pope Francis March 12, 2014 Paul Fidalgo

Anecdotes of a Church Being Changed (Maybe) by Pope Francis 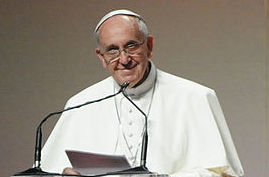 An atheist friend of mine is married into a Catholic family, and he attends church with said family every Sunday, being a good sport and a general glutton for punishment.

This friend — in fact, let’s call him “GFP” for “glutton for punishment” — noticed a change of tone lately at the church his family attends, and he wondered if the let’s-all-be-nice public persona of Pope Francis (or, as I call him at The Morning Heresy, Pope Fluffy) is trickling down and beginning to genuinely change things in the Catholic Church as a whole.

Now, I realize this is all a highly-localized anecdote from one guy, but I thought it was interesting enough to share.

Here’s what GFP told me was going on during “prayers of the faithful” (bear in mind his quotations from church are paraphrases):

As your man on the inside, I have a tidbit of news: the new papal tone is having an effect on the mass. Every week they say a set of short prayers, and every so often it’s something like, ‘That our politicians recognize that all children have a right to live [an abortion reference, if it’s not obvious], we pray to the Lord,’ or, ‘That our elected leaders promote the values of religious freedom, especially that Obama who wants us to pay for contraception, that jerk, we pray to the Lord.’

But this week they prayed ‘that politicians and our leaders in government recognize their responsibility to create laws promoting economic equality for all our fellow citizens.’

This is huge. I mean, I’ve been biting my tongue through the abortion crap for a while now, so this kinda threw me for a loop.

Again, this is one church, one guy, one time. But it’s not the first such anecdote. For example, my wife’s aunt, who is way too cool and smart to be part of the Catholic Church, but who is nonetheless actively involved in her local church, tells me that the new bishop, appointed by Francis/Fluffy, is a down-to-earth, friendly, accessible, smart guy, as opposed to who they had before, a Ratzinger guy, who, well, was not those things. She, like GFP, sees the influence of Francis there.

Now, I have been accused of being a “fan” of Pope Francis (and now I can’t find the link to one such accusation, but trust me, it’s happened), and let’s be clear — he’s the head of one of the most mind-bogglingly regressive, grossly opulent, and dangerous institutions on the planet. Just because he behaves a little more nicely doesn’t take him or the Church off the hook for the generations of crimes and attempts to drag us all back to the Dark Ages. But it’s fascinating, all the same, to see if whatever positive traits this Pope does possess can have a beneficent effect on the institution generally (even if they are simply for show) and then translate into something that begins to resemble progress on the ground.

So if you know folks in the Church — family, friends, or yourself (if, like GFP, you’re kind of undercover) — what anecdotes are you picking up? Is Pope Francis fluffifying a church near you?