And much like Jon Stewart‘s skewering of the same issue back in 2011, Colbert’s segment was heavy on mockery but empty on substance: 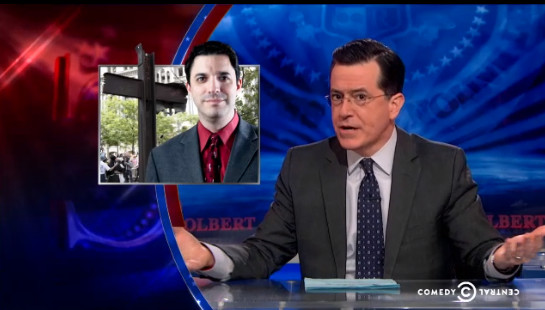 Here’s why I didn’t like the segment — and it has nothing to do with the fact that atheists were the targets of the jokes. (And, yes, I’m aware I’m overanalyzing a comedy segment that admittedly made me laugh.)

The basic argument is that this cross provides emotional relief for Christians and that alone should be reason to allow it. But as soon as you open that door, it means saying yes to roadside crosses on public property and prayer before public high school football games and anywhere else Christians may want to push their faith.

If you want to complain about what American Atheists is doing, then tackle their argument that the cross amounts to an endorsement of religion and a violation of the First Amendment. How it makes Christians feel is irrelevant.

March 11, 2014
Sitting in on a Meeting of Courageous Pakistani Atheists
Next Post

March 11, 2014 In Oregon, Students Are Skipping Math Class to Learn About the Bible
Browse Our Archives
What Are Your Thoughts?leave a comment