Syracuse resident Marcell Washington is a follower of Islam. So when, back in November 2011, he started feeling uneasy about hearing strange whispers — some, perhaps, emanating from his three-year-old son, Ameen — he asked a religious elder what he should do.

The man told him to take Ameen (below) to a mosque, where Washington should read the Qur’an and pray. 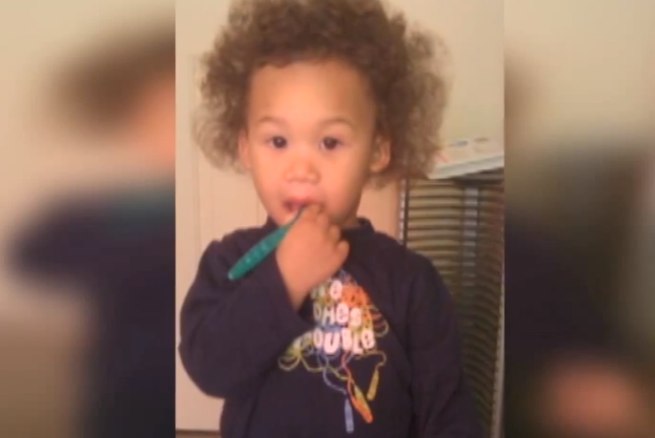 Later that day, this transpired:

Marcell Washington put his 3-year-old son into a cold shower and demanded to know if the young boy worshiped only God. When Ameen said “no,” Washington forced open the boy’s eyes so water could fill them. “I did this because I wanted to kill the Shatan that I believed was in my son,” Washington explained later. “I thought by killing a portion of Ameen, it would kill the Shatan in him.”

The boy’s frantic struggle convinced his father even more that “Shatan,” or the devil, remained in him. The exorcism continued. Washington held his son’s face under water for about 10 minutes.

“When I was holding him under the water Ameen was still fighting me really hard,” Washington said later. “After about a couple of minutes Ameen stopped fighting so hard and he started to collapse. After ten minutes or so Ameen collapsed in my arms and I took him out of the shower.”

The father wrapped his son in a white towel and put him in the bedroom. … Afterward, he checked Ameen’s pulse and found none. “I didn’t think he was dead because the pulse of the Shatan is very hard to track,” Washington said.

But of course, Ameen no longer had a pulse.

Under interrogation, Washington told officers he would do it all over again.

“He stated that he did not feel he did anything wrong,” one officer wrote. “He also said that his child was better off dead than living with a devil inside of him.”

Washington had no known history of mental illness, but in the weeks before the killing,

He talked dreamily of going “upstairs.” He seemed suddenly insistent on getting married. He talked to himself. He prayed loudly and urgently.

After a lengthy mental-health evaluation, Ameen’s killer, who experts say may have suffered from schizophrenia, was indicted last month on felony murder charges.

Washington used to write and perform rap and hip-hop songs under the name Swagga Cell. In “Pushin’ It,” still available to stream on the music website Reverb Nation, he throws down these lyrics:

It’s a crazy world we live in
That forces us to push to the limits
So that’s what I’m doin’.

A trial date has not yet been set.