New York Pastor Honors the Legacy of Jesus With a Raffle for an AR-15 March 8, 2014 Terry Firma

A pastor in Troy, New York perhaps took a cue from the Kentucky Baptist Convention when he decided that a great way to promote the Lord Jesus was to give away an AR-15 rifle. The flyer that the Rev. John Koletas has been distributing shows a picture of the fierce-looking firearm below a Biblical quote, from John 14:27, that reads “My peace I give unto you.” 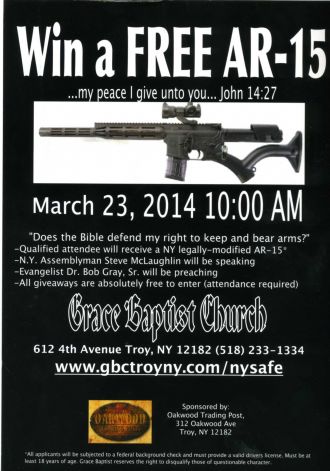 Koletas, who works as a Rensselaer County court reporter, said he wanted to show support for Second Amendment rights.

“I’m just trying to be a blessing and a help to the gun owners and the hunters and give away a free AR-15,” he said. “It’s the right thing to do.”

The lucky winner will get the same gun that, according to ex-Lieutenant General Jerry Boykin, Jesus will be carrying when he returns to earth as a warrior on a white horse.