In 2012, Jaber Mejeri (pictured below) was convicted to seven years in prison for posting cartoons critical of Islam that a Tunisian court deemed “disturbing [to] public order and public morals.”

Now, he’s out of jail, but not out of danger:

The lawyer for a Tunisian blogger sentenced to seven years in prison for posting cartoons deemed insulting to the Prophet Muhammad says her client was freed late Tuesday. 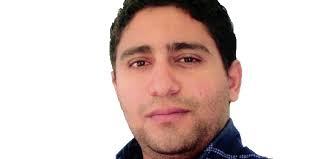 Lawyer Bochra Belhaj Hamida said Wednesday that Jaber Mejeri had left prison for his hometown of Mahdia 60 miles (100 kilometers) south of the capital and measures were being taken to ensure his safety.

Mejeri became a major figure in the battle over freedom of expression in post-revolutionary Tunisia when cartoons shared on Facebook by him and a friend landed him with a seven-year jail sentence in 2012.

Amid international and local outcry, President Moncef Marzouki pardoned the 29-year-old Mejeri on Feb. 19, however authorities at first kept him in prison pending new charges of embezzlement by a former employer.

I’ve tried in vain to find copies of the cartoons that got Majeri in trouble, but will gladly post them if anyone can share.

March 7, 2014 An Atheist Speaks About Her Miscarriage
Browse Our Archives
What Are Your Thoughts?leave a comment