So That’s How Mark Driscoll’s Book Ended Up on the NYT Bestsellers List… March 6, 2014 Hemant Mehta

On January 22, 2012, a book written by Pastor Marc Driscoll and his wife Grace debuted at #1 on the New York Times‘ “Hardcover Advice & Misc.” bestsellers list. 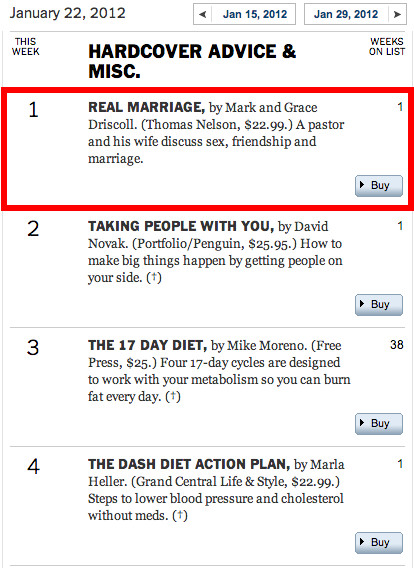 (For what it’s worth, we were not fans of the book at this site.)

The following week, Real Marriage was off the list completely. Which seems strange… but it didn’t matter since the phrase “#1 New York Times Bestseller” could now be plastered atop all future editions of the book: 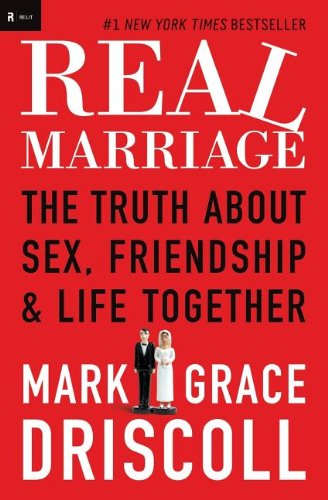 You might think, looking at all of that, that there was a mad rush of people buying copies of the book the moment it came out.

But that’s not the whole truth, according to a report by Warren Cole Smith at WORLD Magazine. Yes, the book sold a lot of copies that week… but Driscoll’s Mars Hill Church paid a company a hell of a lot of money to make sure that happened — essentially outsourcing the job of bulk-buying their pastor’s own book:

Seattle’s Mars Hill Church paid a California-based marketing company at least $210,000 in 2011 and 2012 to ensure that Real Marriage, a book written by Mark Driscoll, the church’s founding pastor, and his wife Grace, made the New York Times best-seller list.

It’s not an illegal practice, but it’s sure-as-hell shady:

Mars Hill would not say whether the funds for the purchase of these books, which would total approximately $123,600 for the individual sales and $93,100 for the bulk sales, came from church funds.

In order to make the promotion work, Mars Hill had to supply Result Source with thousands of addresses in all different states. How did they accomplish that? Warren Throckmorton speculates:

While I can’t prove this, I can speculate that they were collected on Mars Hill website via a Real Marriage donation promotion in December, 2011. Visitors to the website were asked to give a $25 or more donation to Mars Hill and in exchange the donor would get a copy of Real Marriage. The purchase was made through realmarriagebook.com (a site no longer in operation). However, via the Internet Archive, we can get a look at it. Presumably, the individual would make a donation and enter an address where the book could be mailed. The $25 would provide enough money to cover the $18-20 needed to purchase the book with some left over for either Mars Hill or to help pay ResultSource. If I am speculating correctly, the addresses would be used by ResultSource’s nationwide network of buyers (RSI bragged that they have such a network with multiple payment sources — credit cards, gift cards, etc.) to purchase the books and deliver them to the donors.

This is as much an indictment of how easy it is to manipulate bestsellers lists as it is Driscoll’s church, but you would think a church would be honest and ethical, right? (I know, I know, I’m laughing too.) I might understand if lots of money was spent marketing Driscoll’s book, but the fact that they didn’t think people would buy it of their own accord, that they felt compelled to indirectly buy the book themselves, tells you everything you need to know about how awful Driscoll’s advice really is.

Of course, he won’t speak about any of this. Give it a few days and he’ll just spin this into a story about how he’s so persecuted, and how he just wants to help families, and (*sniff*) you can buy a copy of the book to see his advice for yourself.

March 6, 2014
Even the U.K. Wages 'War on Christmas': KFC Spot That Spoofed the Holiday Draws Complaints, Resolution
Next Post