Ohio Ministers, In Cahoots With Cops, Stage Their Own Mock Arrests to Illustrate ‘Christian Persecution’

Do you have any idea how oppressed and persecuted American Christians are?

So oppressed and persecuted that in order to prove it, pastors in Ohio called the local cops and requested to be taken into custody in front of their congregations.

You heard right. The histrionic clergymen staged mock arrests — with the help of publicly funded police officers no less — to drive home how severely their Jesus faith has come under attack. 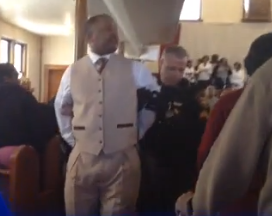 Via the Washington Times:

Videos of the mock arrests posted online brought a wave of criticism for the Summit County Sheriff’s office from people who thought the deputies really were interrupting church services to make arrests.

Sheriff Steve Barry says his deputies took part in the mock arrests Sunday at a couple churches around Akron after the pastors approached his office and asked it to participate.

The churches staged the arrests as part of their “Defending the Faith” sermons. Videos showed deputies handcuffing pastors while they preached and placing them in patrol cars.

… make people more aware of what it takes for pastors to defend the Christian faith beyond preaching on Sundays.

… [a] drama [at the Akron Civic Theater] will be set in a courtroom where local pastors, who are accused of not defending their faith, will respond to the charge by explaining how their ministries require them to be on call 24 hours a day, seven days a week.

Putting on a stage play is one thing. But that church officials are reduced to staging arrests by bad-guy cops (who clearly represent the long arm of government) is the best illustration yet of how absolutely deranged the Christian persecution narrative has become.

March 6, 2014 Before Giving an Invocation Prayer, This Catholic State Representative Delivered a Fantastic Disclaimer
Browse Our Archives
What Are Your Thoughts?leave a comment