When Hiring, Some Muslim Schools in the U.K. Practice a Shameless Kind of Gender Segregation March 5, 2014 Terry Firma

When Hiring, Some Muslim Schools in the U.K. Practice a Shameless Kind of Gender Segregation

It’s not hard to spot what’s wrong with this picture … unless you’re running a Muslim school in the United Kingdom. 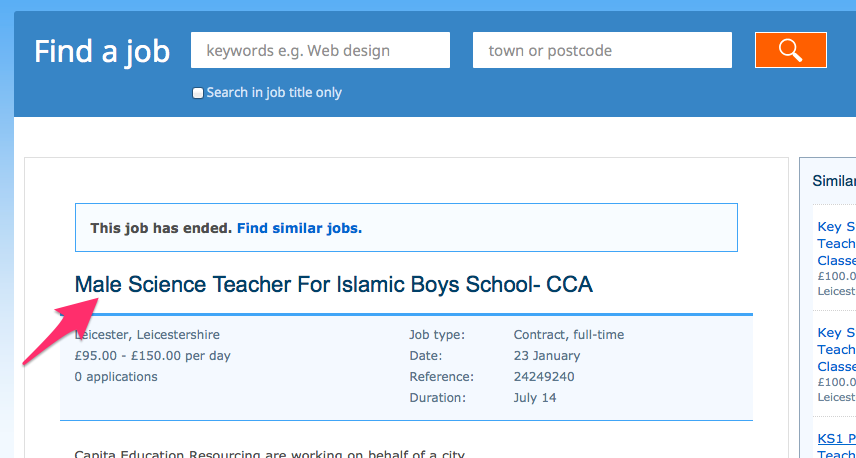 That’s not a one-time slip-up, but a pervasive pattern at some Islamic schools, says the British Humanist Association — even though this kind of thing has been against the law for the better part of 40 years.

Last week Madani Boys School in Leicester was at the center of controversy after it emerged that the school had advertised for a science teacher and an ICT technician while restricting both jobs to males. Now the British Humanist Association (BHA) has discovered that at least two other Muslim state schools, Madani Girls’ School and Feversham College in Bradford, have extensively engaged in similar practices.

The discrimination works against both genders, depending on whether the Islamic school in question caters to boys or girls:

Madani Girls’ School (the sister school of Madani Boys School) has frequently advertised for staff (including Headteacher, Head of Life Skills, Cover Supervisor and Teaching Assistant), while stating that there is a ‘genuine occupational requirement’ that the post holders are female. And Feversham College, a girls’ school in Bradford, has attempted to create an ‘all-female environment’, advertising for ‘enthusiastic females’ as Head of Humanities, Maths Teacher, House Leader, Technology Technician, Teaching Assistant, Attendance Officer, Exams Officer, Typist, Pupil Records Officer and Intervention Support Officer. In fact, of the 127 staff, just two appear to be male.

Schools with a religious ethos are already permitted to discriminate against teachers who do not share the faith of the school. Exceptions to equality legislation that permits single-sex schools to admit pupils of only one sex apply only to admissions, and do not apply to the appointment of teachers.

Both organizations have alerted the Department of Education, but I’m skeptical that anything will change. Even if schools deep-six this kind of overt gender discrimination in personnel ads, it’s unlikely that that will result in substantially more equitable hiring; schools will still pick whom they please. I hope I’m wrong.

March 5, 2014
After Long Condemning Homosexuality, Evangelicals Are Now Trying to Distance Themselves from Uganda's Anti-Gay Law
Next Post