Locked in Their Echo Chamber, Most Gay-Marriage Opponents Mistakenly Think They’re In the Majority

Like the 80’s Moral Majority that was neither, same-sex marriage opponents have an odd inclination to think of themselves as a mighty army, rather than as a few battalions of increasingly scattered troops.

Data journalist Christopher Ingraham at the Washington Post‘s Wonkblog looks at the numbers:

According to a new survey by the Public Religion Research Institute, only 41 percent of Americans oppose allowing same-sex couples to marry. But that same 41 percent has a highly skewed perception of where the rest of the country stands: nearly two-thirds of same-sex marriage opponents erroneously think most Americans agree with them. And only two in 10 same-sex marriage opponents realize that the majority of Americans support marriage equality. 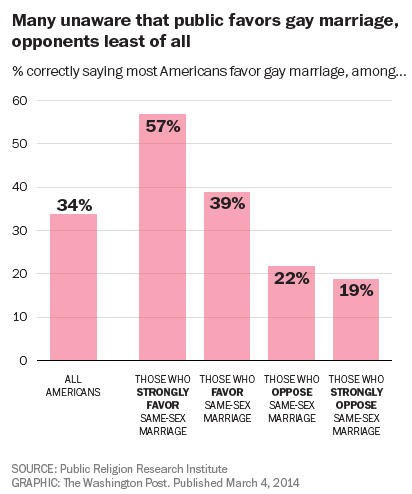 [S]ame-sex marriage opponents are unique in the depth of their misunderstanding of the issue. Because they skew strongly conservative and deeply religious, this may be a manifestation of what Andrew Sullivan has termed “epistemic closure.” Think of this as an extreme case of confirmation bias — that tendency of people to filter out information that challenges their beliefs and preconceived notions.

Ingraham sees the same phenomenon at work in state legislatures.

[T]his fact is crucial to understanding the “religious freedom” legislation cropping up in places such as Kansas and Arizona. On the surface, it makes little sense to codify discrimination into law when public opinion has shifted dramatically toward equality and the courts are following suit.

I’m not sure that’s true across the board. Most of the hardcore Christian legislators who make it onto this blog seem as driven by their personal Biblical beliefs as they are by the need to pander to their base. I’ll bet it’s a point of pride for many that they’ll push their views on citizens no matter what the majority says.

On the plus side, in a democracy, that’s a slow if surefire shortcut to the graveyard of dinosaurs, a.k.a. the trash heap of history. When the moment comes, they’ll still be wondering what hit them, while a solid majority of U.S. voters will be glad to tell them “I told you so.”

March 5, 2014
Despite Supreme Court Decision, Homeschooling Family That Fled Germany For U.S. Is Allowed To Stay
Next Post