This Pastor’s in Trouble with His Church for Supporting the LGBT Community but Atheists Are Coming to His Defense March 4, 2014 Hemant Mehta

Last week, for a local newspaper, Rev. Seth Pickens wrote a brief list of reasons he supports the LGBT community: 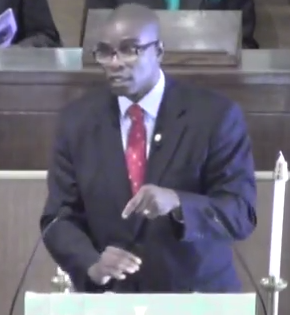 2. Some want to get married, and some don’t; go figure. They also bleed red if you cut them.

7. Homosexual behavior is documented in many species of animals; maybe some are just born that way.

8. As much respect as I have for the soul of animals, I have even more respect for human beings.

I have a couple of complaints about the list, but on the whole, it’s quite a breath of fresh air compared to what we usually see from pastors. Yet that simple list got him in a lot of trouble with his church community. (It probably didn’t help matters that he performed a wedding ceremony for a lesbian couple last year.)

At Religion Dispatches, Sikivu Hutchinson tells the story of why she and some of her atheist friends are supporting him as he goes through this ordeal at church:

Over the past three years, Pickens has even been a supporter of “interfaith” dialogue with my Black Skeptics Los Angeles organization, opening the church’s doors to our community forums on atheism, black secular humanist traditions and civil rights resistance. I’d first met Pickens when I was exploring the grounds of the church with my then toddler daughter. After greeting me and introducing himself, he’d asked if I belonged to any of the local congregations. When I told him I was an atheist, the first words out of his mouth were not, “Why?” but “I respect that.”

… Funneled in and out of juvenile facilities, adult prisons, group homes and homeless shelters, LGBTQ youth of color often have nowhere else to turn but progressive churches and faith-based organizations.

Given the dearth of secular nonprofits and social welfare institutions in our neighborhoods, churches with leaders like Pickens can be a lifeline for queer and transgender youth of color.

Despite his outreach, Pickens has until today to explain to a church “tribunal” his stances on homosexuality and biblical morality. As if he did something wrong.

Read Sikivu’s piece — at the end, she explains where letters of support can be sent.

March 4, 2014
AC Grayling's The God Argument is Now Available in Paperback
Next Post