The Creepiest Excuse Ever To Justify Anti-Transgender Discrimination

The next big civil rights hurdle for the LGBT community is full equality for transgender people, and as always, some Christian conservatives take this as a personal threat. And this exchange between two dangerously ignorant Christian men is one of the most disrespectful, downright threatening viewpoints I’ve heard in the debate so far.

An increasing number of states are considering laws like California’s SB 1266, which allows transgender students to use whatever school restrooms and athletic facilities best correspond with their gender identity. Religious conservatives are terrified by the idea, regularly launching smear campaigns and repulsive ads that demonize transgender people and cast them as predators — with absolutely no evidence to back up these claims.

That’s right: While the most common argument against trans-inclusive school bathrooms is that boys will pretend to be transgender in order to see girls changing, there are no documented examples of this ever happening in any school. It’s a made-up problem. It doesn’t exist.

But that hasn’t stopped Christian talking heads from theorizing about what will go wrong if transgender students are allowed to use the restrooms of their choice. Right Wing Watch recently grabbed a video clip of Pastor Jack Hibbs interviewing Brad Dacus, president of the hyper-conservative Pacific Justice Institute, about laws like California’s. In a short minute and a half, they degrade trans students, young women, and even young men in the chilling way that only old Christian dudes can do. 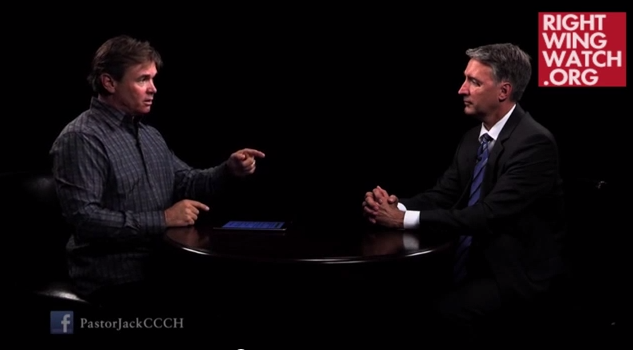 We don’t get much context when the clip begins, but Hibbs dives right in. With certainty, he declares: “Every boy is going to try to sneak a peek.”

Immediate red flag. Every boy? Are good Christian parents teaching their sons it’s acceptable to prey on girls, invade their privacy, and expect no consequences? Though he looks a little uncomfortable, Dacus nods knowingly and responds, “I was a prankster.” Hibbs continues:

“The kid goes in there and takes a look. What happens when that kid comes out and word spreads around campus?”

Well, in an ideal world, he is punished accordingly by a trusted official for his wrongdoing, then spoken to sternly by his kindhearted peers about why it’s never, ever okay to take away a girl’s safety and privacy in the way he has done. If children are not fairly reprimanded when they do terrible, creepy things, they will grow into adults who do terrible, creepy things.

But that is not the world Hibbs envisions.

“Having lived through my generation, there’s gonna be young men that are gonna target that kid and really, really lay it on him. It’s going to make bullying worse.”

“That’s going to happen. Who will be responsible?”

Who will be responsible?! The preteen jerk who snuck into a bathroom to gawk at girls! (And perhaps his ignorant parents.) It is not Gov. Jerry Brown‘s job to protect teenage creeps.

This is a frightening example of how too many conservative Christian men organize their priorities. Hibbs is not merely claiming that students are in danger of “peeping Toms” pretending to be transgender, an already absurd argument which has happened in real life a total of zero times. No — he’s saying that a law like this one might actually harm boys who want to sexually harass girls. And that’s his problem with it.

Under Hibbs’s logic, a presumably straight boy who just wants to “sneak a peek” at girls is the victim here. (Not the trans students who face staggeringly high rates of bullying from students and teachers just for being who they are. Certainly not.) And allowing transgender students to use the correct bathrooms makes this “victimization” an inevitability.

The analogy here is not just misogynistic but also reduces men to sexual predators incapable of rational thought or self-control; after SB 1266 passed, commenters on an article from a Christian publication suggested that the policy change would result in cisgender men raping trans men, as if merely being in the presence of a person with a vagina is enough to motivate someone with a penis to rape. Why aren’t more men offended by this?

Again, it frustrates me to have to debunk this hypothetical scenario because there are virtually no documented incidents of boys pretending to be trans girls in order to be creepy in bathrooms. That just doesn’t happen. But it’s the only thing conservative Christians have, and hey, when it’s a matter of religious freedom being “violated,” who needs evidence?

Nonetheless, we should be extremely wary of men like Jack Hibbs, who will try to inject this toxic slander into legitimate, timely discussions that affect a lot of people. It is more important to Jack Hibbs that straight boys can sexually harass girls without consequence than it is for trans students to have any privacy of their own. It is easier for him to deny others their rights than it is for him to teach his fellow Christian men not to rape, intimidate, or harass. And it is clear that he is a much greater threat to girls than the trans peers who share their bathrooms.

March 4, 2014
Arizona House Passes Bill to Give Tax Breaks to Property Owners Who Lease Their Space to Churches
Next Post