He really is a man of the people. Pope Francis cussed during a speech the other day, albeit without meaning to.

The Pope’s message of charity was lost in translation on Sunday, as he accidentally muddled “caso” (“case”) with “cazzo” (“fuck”). 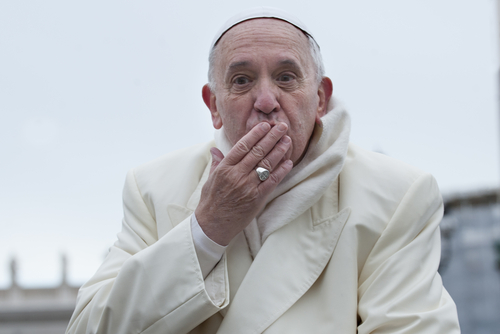 If your Italian’s a little rusty, here’s how the pontiff tripped up:

“If each one of us does not amass riches only for oneself, but half for the service of others, in this fuck [pause], in this case the providence of God will become visible through this gesture of solidarity,” he told followers amassed in St Peter’s Square.

Mafiosi and Italian sailors, known for their salty language, said they had a newfound respect for the profanity-spewing Pope, and affectionately referred to him as “this fucking guy.”

March 4, 2014
New Atheist Billboard Campaign Shows That It's Not Just Mormons Who Live in Utah
Next Post

March 4, 2014 London Vicar to Defy Church Leaders By Marrying Atheist Same-Sex Partner
Browse Our Archives
What Are Your Thoughts?leave a comment