No, the Anti-Gay Christian Version of the Boy Scouts is Not Promoting This ‘Sieg Heil’ Salute March 4, 2014 Hemant Mehta

No, the Anti-Gay Christian Version of the Boy Scouts is Not Promoting This ‘Sieg Heil’ Salute

Over the weekend, MSN and other news outlets posted a story about Trail Life USA, the Christian version of the Boy Scouts that bans gay members. Some of those outlets happened to include this awkwardly-timed picture taken during a singing of the song “Taps”: 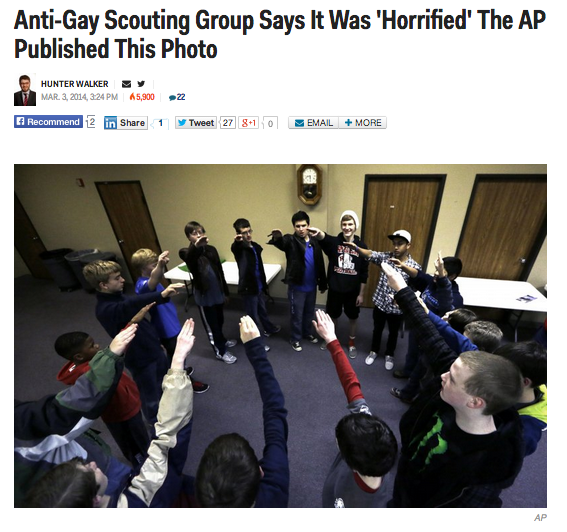 Chairman of the board John Stemberger is now trying to do damage control (as if the group’s reputation was so great to begin with…):

“We were horrified when we saw the photo in question on the MSN site and immediately investigated the situation,” Stemberger said in a statement Monday. “This is what we learned… Many Boy Scout Troops have a tradition of ending their troop meetings with the boys gathering in a circle and then singing the song ‘Taps’ which is a slow ceremonial piece of music played or sung at the end of the day. The Boy Scouts that do this closing ceremony start singing the song with their hands raised straight into the air with the scout sign and then gradually lower their hands till they get to the end of the song when hands are at their side. This longstanding Boy Scout tradition was being followed with this Texas Trail Life troop using the Trail Life sign.”

Stemberger also said the “Trail Life sign/salute is a standard military salute using the full hand with all four fingers.”

When a theoretical Nazi salute is still the second worst thing about your organization, you know you have problems.