Half a year ago, the vestry of Grace Episcopal Church in Pine Bluff, Arkansas adopted a lovely, heartwarming Statement of Inclusivity. It was belatedly posted on the church’s Facebook page last Saturday. The statement reads, in part:

“We extend a special welcome … to those who are single, married, divorced, partnered, LGBT, filthy rich, dirt poor, or struggle to speak English.” 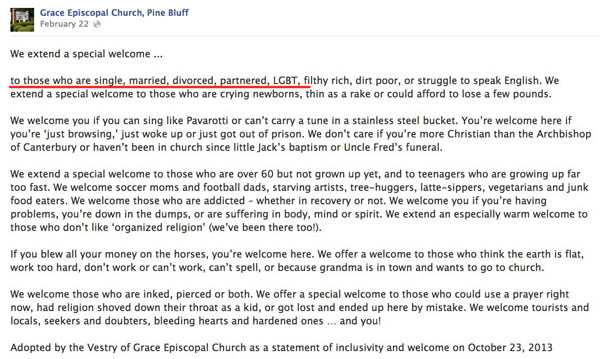 Maybe we didn’t read the statement correctly? Let’s enlarge and make sure.

Yeah, there’s definitely a T there.

Fry told his congregation last Sunday that he had long experienced severe gender dysphoria and was transitioning into a life as a woman — and invited everyone to please call him Gwen. By the middle of the week, she and the members of the vestry received a letter from Bishop Larry Benfield that stated:

“The announcement by your priest-in‐charge that he is transgender has resulted in our church taking a look at gender in ways that would not have likely occurred in a previous generation … I realize that at Grace Church one thing I can do to assist with your current health and to refocus all of us on mission is to offer my leadership as your bishop in the most constructive way possible. With that end in mind, I have decided to dissolve the relationship between the priest‐in-charge and Grace Church, effective February 28, 2014 … This action will allow the priest to transition at a pace that might not otherwise be possible.”

So “in the most constructive way possible,” Benfield axed his transgender colleague, passing off a pretty brutal-seeming decision as an act of compassion, and somehow managing to sell the pink-slipping of Gwen Fry as being for Fry’s own benefit.

Fry is, however, OK with the bishop’s decision, she says. (It should be noted that she is not, in Anglican parlance, “inhibited,” meaning that her Episcopal priesthood remains intact.)

“I fully support and agree with the bishop’s action of dissolution and believe it was the very best thing to happen for everyone involved. I thank the bishop for his generous and pastoral response in this situation and fully support his decision and leadership in bringing a gracious and holy end to this. … My hope is that someday this will not be newsworthy, or even an issue at all, and people may live as the children of God in all the wonderfully diverse ways there can be.”

Apparently Greg Fry fell through the cracks at his own church. That special all-inclusive welcome was not extended to “Gwen Fry,” in a seeming violation of the newest Episcopal Church canons which embrace transgenderedness in all its forms.

March 2, 2014
Tackling the Moral Argument for God
Next Post

March 2, 2014 The Mormon Church Isn't Exactly Denying the Idea of Owning Your Own Planet After You Die
Browse Our Archives
What Are Your Thoughts?leave a comment