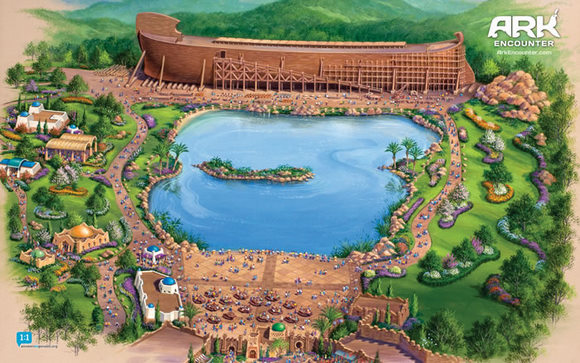 Exactly how much money they’ve raised is unclear, though, since Answers in Genesis’ Ken Ham spent much of yesterday’s question-less press conference railing against bloggers and other members of the media for criticizing his plans:

“We praise our Creator God for His blessings and for the incredible support we just witnessed from our generous supporters around the country,” declared Ham. “Yes, there have been days of nervous anticipation. Many challenges and road blocks came up as we worked through the stages of the bond offering leading up to the final bond delivery. From atheists registering for the bond offering and attempting to disrupt it, to secular bloggers and some reporters writing misleading and inaccurate articles about the bonds — the obstacles were numerous and disruptive.”

“Even in a difficult economy, tens of thousands of supporters have made donations, purchased bonds, or bought Ark boarding passes in the past three years,” Ham observed. “With the funding in place to build the Ark, it is now our goal to raise an additional $15 million in donations to provide additional attractions like the special high-tech and interactive exhibits that guests have come to appreciate at our museum.”

With the completion of the bond offering, the next milestone is groundbreaking, for which a tentative date will be announced in a few weeks.

Bill Nye, still fresh from his recent debate against Ham, was disappointed with yesterday’s news:

Reached by phone Thursday, Nye said he was disappointed the project would go forward and said he hoped it “goes out of business.”

There’s been a lot written about the shady financial issues at hand here, but not nearly enough about the educational damage this will cause. The Ark Park is being built with the same intention as the Creation Museum: To convince people that the Bible is a science book that must be taken literally and seriously when, in reality, it’s no more than an influential fairy tale. Creating a child-friendly version of Noah’s Ark with the intention of convincing kids the story is true is detestable. Instead of opening kids’ minds with science, Ark Encounter is attempting to turn them against evidence in favor of faith. It seems like Ken Ham just wants to take children’s minds, minds that are malleable and easily persuaded, and warp them before they’re old enough to know better.

February 28, 2014
President Obama Says His Campaign Volunteers and Other Supporters Are Doing 'God's Work'
Next Post