Are Atheists Better and More Trustworthy Friends? For One Pained Christian Preacher, the Answer Is Yes February 28, 2014 Terry Firma

Are Atheists Better and More Trustworthy Friends? For One Pained Christian Preacher, the Answer Is Yes

Christianity has roughly 41,000 denominations. Most of their members quietly or not-so-quietly claim that they are purer and better Christians than the folks in the other 40,999 groups.

Think of all the pain — strife, frustration, aggression, violence, heartbreak — that radiated out from the forming of virtually each of those factions. Christians love a good schism (or at least, they don’t seem able to prevent causing new ones). With each new rift, the human toll in terms of shunnings, ruptured family ties, and lost friendships goes up. You’ll need a Python-strength sense of humor to see the fun in that. 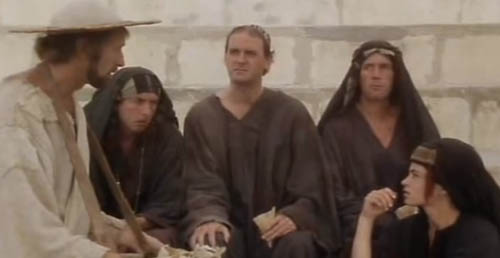 Splinters, as we all know, can hurt.

Patheos blogger and Anabaptist preacher Benjamin Corey writes that he lost quite a few friends when he gradually moved from conservative to progressive Christianity.

[W]e’ve been dividing up into so many sub-tribes that it’s impossible to keep track of all of them. As kids, many of us went to “Christian” summer camps where a common message was that our friends would all leave us when we got back home from camp. Now as adults we’ve refused to worship with people who worship the same Jesus differently than ourselves. …

I find myself with beads of sweat pouring down my head each time I get ready to push the “publish” button for a new post. Will I lose any friends over this? If I take a theological stance on this issue or in this direction, will it be “too much” for some people to be in relationship with me?

So which friends don’t make him walk on eggshells all the time?

Christian culture has become so “tribe exclusive” that my favorite, most trustworthy friends… are atheists. Why? Well, because they love me for me, want to be in a relationship simply for the relationship, and they’re not going to stop being my friend if my theology shifts. Truth be told, I wish my Christian friends were like my atheist friends because I’d love to feel the relational safety of believing they’re not going to walk out on our friendship.

I don’t know that atheists make better friends, but I think they may have an easier time relating to one another … because there are no sacred texts to interpret and fight over. Even when something like Atheism+ causes lots of hurt feelings among non-believers, or when atheists debate whether Sam Harris has gone too far in his condemnations of Islam, it probably doesn’t rise to the hotheaded importance that religious people attach to their discussions. When they get it wrong, they may lose their chance to join Jesus when the Rapture comes; when they choose an incorrect interpretation of the Perfect Book™, they may waste the opportunity to go to heaven and cavort with 72 big-breasted virgins for all eternity.

In all seriousness, those stakes are clearly higher.

As for how atheists relate to people of faith, it runs the gamut, of course — from puerile, tiresome, across-the-board insults slung at Christians and others, to long and friendly philosophical exchanges on the Internet, to beer and s’mores by a campfire.

From anecdotal evidence, I’d say that the exasperation (a factor that probably impedes friendships) seems about equal on each side.

Since, in the U.S., Christians vastly outstrip atheists in number and political power, that may mean that more of them feel emboldened to act toward non-believers with the kind of haughty confidence or even aggression that won’t make them many friends — but I’m just guessing. Certainly, none of the Christians I know personally, and know well, act like that (admittedly, that’s a self-selecting sample, as I don’t gravitate toward judgmental Bible beaters). Also, there’s no dearth of haughty confidence and cheap taunts on many atheist blogs.

I wouldn’t put any money on the theory that atheists make better friends, but Corey’s observation is tantalizing, and I’d love to see some social research that addresses the claim.