A ‘Homeless Person’ Turns Out to Be a Jesus Sculpture, and Not Everyone Is Happy About It February 28, 2014 Terry Firma

A ‘Homeless Person’ Turns Out to Be a Jesus Sculpture, and Not Everyone Is Happy About It

What would you do if you saw someone wrapped in a blanket, sleeping on a bench outside a church?

For Cindy Castano Swannack, who drove by St. Alban’s Episcopal Church in Davidson, North Carolina the other day,  the answer was “call the police.”

When informed that it was a sculpture depicting Jesus (with stigmata on his bare feet that poke out from under the blanket), Swannack seemed taken aback. She told the local NBC affiliate that 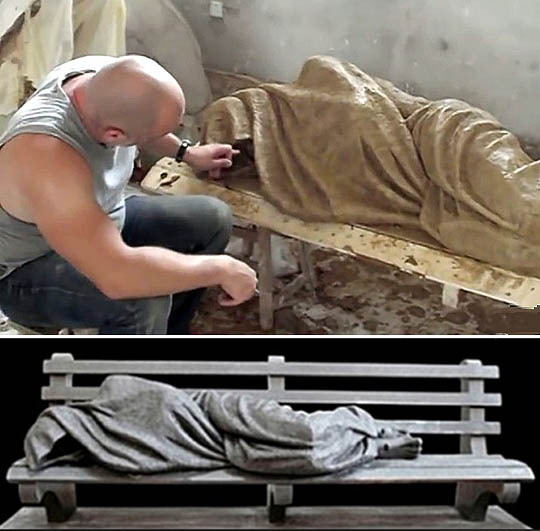 “Hopefully [people] don’t get the message right away. First of all, they hopefully will think it’s a real person. Then second, they will realize it’s a bronze sculpture. And then third, they’ll realize it’s Jesus Christ. So, it’s kind of theater in a sense; it’s sequential, how someone understands the piece, or how the piece unfolds.”

I have to say, I kinda like it. Of course, not all people do.

In a letter to a local news website, resident Jerry Dawson likened the Jesus depiction to a creepy Grim Reaper, and added:

… “My complaint is not about the art-worthiness or the meaning behind the sculpture. It is about people driving into our beautiful, reasonably upscale neighborhood and seeing an ugly homeless person sleeping on a park bench.”

I’d imagine that some atheists are put off by the sculpture, too, perhaps on the grounds that bronze sculptures are not cheap and that the money would have been better spent on helping actual homeless people.

If that’s your opinion, I can respect it, but I’d like to know if you feel similarly about, let’s say, the Atheist monument/bench that was unveiled outside the Bradford County courthouse in Florida last year. American Atheists has vowed to put up fifty more of those, all over the country, at an expense of $300,000 or more. Would that money be better spent on helping the needy? If the Jesus bronze is a waste, is the atheist granite any better?