Yesterday, in a move that is sure to embolden swaths of Muslim grievance junkies, the 9th U.S. Circuit Court of Appeals ordered Google to remove the controversial short film Innocence of Muslims from YouTube. 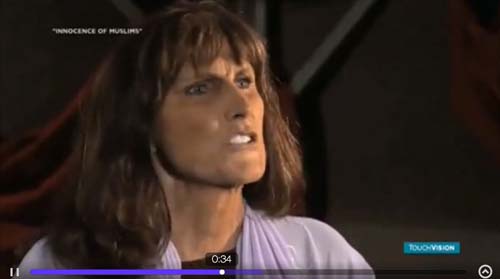 The 2-to-1 decision came when the judges found in favor of actress Cindy Lee Garcia (pictured above), who objected to the film

… after learning that it incorporated a clip she had made for a different movie, which had been partially dubbed and in which she appeared to be asking: “Is your Mohammed a child molester?“

If her account is true, it was an extremely douchey thing to do on the part of the film maker, Nakoula Basseley Nakoula, an Egyptian-born Coptic Christian who is a U.S. citizen and who cobbled together Innocence of Muslims as a crude anti-Islam propaganda piece.

But does his underhanded treatment of Garcia mean that U.S. authorities may try to seriously limit the global and U.S. stage for the movie?

Google doesn’t think so, and said it will appeal the court’s decision.

In court filings, Google argued that Garcia appeared in the film for five seconds, and that while she might have legal claims against the director, she should not win a copyright lawsuit against Google.

The film has now become an important part of public debate, Google argued, and should not be taken down.

“Our laws permit even the vilest criticisms of governments, political leaders, and religious figures as legitimate exercises in free speech,” the company wrote.

But Garcia argued that her performance within the film was independently copyrightable and that she retained an interest in that copyright.

Again, Garcia’s scene in Innocence of Muslims is all of five seconds long, in a production that clocks in at 13-plus minutes. It’s unfortunate that her copyright claim, understandable though it is, had to be addressed through a court action that (a) seems to weaken the First Amendment, and (b) will delight the always-seething Mohammedans whose 2012 protests against the film resulted in

… numerous deaths and injuries across the Middle East, Africa, Pakistan and Afghanistan.

A better solution might have been if Garcia’s lawyer, in tandem with Google, had prevailed upon Basseley Nakoula to recut and reupload the film sans Garcia’s blink-and-you’ll-miss-it scene.

If you want to watch the film — to each his own — you’re out of luck (at least if you’re looking for it on YouTube), because currently you’ll get this: 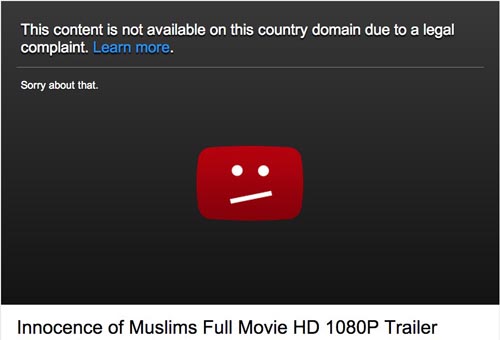 Luckily, though, YouTube isn’t the only game in town. As of this writing, DailyMotion is still streaming the laughably terrible flick; and I’m confident that, insh’Allah, it will always be available somewhere on the web, no matter what judges around the world decree.

February 27, 2014 Judge Rules Against Lake Elsinore City Council's Veterans’ Memorial, Saying Its 'Effect is to Advance Religion'
Browse Our Archives
What Are Your Thoughts?leave a comment