Over at Catholic Culture, founder and president Jeff Mirus thinks it’s time for a new Inquisition.

No, I’m not paraphrasing him or putting words in his mouth. See for yourself: 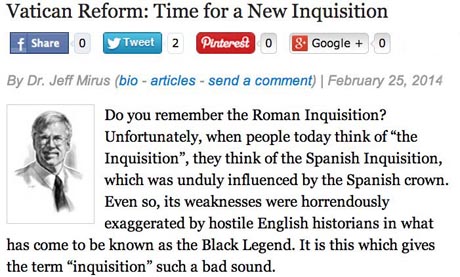 Do you remember the Roman Inquisition? Unfortunately, when people today think of “the Inquisition”, they think of the Spanish Inquisition, which was unduly influenced by the Spanish crown. Even so, its weaknesses were horrendously exaggerated by hostile English historians in what has come to be known as the Black Legend. It is this which gives the term “inquisition” such a bad sound.

That whole Spanish thing, which preceded the kinder, gentler Roman Inquisition, wasn’t even a real church inquisition, Mirus implies, because it was “unduly influenced” by the Spanish state.

Yes, if only the Church had been allowed to show its true benevolence to the thousands of heretics that it regrettably ended up torturing and/or putting to death!

But let’s not dwell on the cruelty and the corpses, because Mirus freely acknowledges that the Spanish Inquisition had its “weaknesses.” Good man. Also, props for knowing, notwithstanding his headline, that the word inquisition sounds kinda bad.

Back in the late Middle Ages and Renaissance, the Roman Inquisition operated throughout significant portions of Europe, firmly under the control of the Papacy, with the purpose of protecting the faithful against priests, religious and bishops who did not fulfill their obligations under Church law. It was an ecclesiastical judicial system and, as such, it was primarily used for cases involving ecclesiastical persons, who in those days were universally accorded the right to be tried by the Church instead of by the Crown. This was called “benefit of clergy.”

Small niggle: the Roman Inquisition started in the mid-1500s — not “the Middle Ages” anymore.

But there are much bigger problems with Mirus’ revisionist prose.

He makes it seem as if the mission of the Roman Inquisition was to punish out-of-control Catholic clergy, and to shield the faithful from rogue elements within the Church. Funny that even a cursory reading of online sources reminds us that the Roman Inquisition’s prime goal was to retard the spread of Protestantism in Italy.

Like the Spaniard Torquemada before them, the Italian inquisitors displayed great fervor in hunting down and punishing heretics. (One of the early interrogators, Antonio Ghislieri, so stood out for his “reformist zeal” that he “provoked resentment“; he nonetheless did well for himself, and eventually became Pope Pius V.) 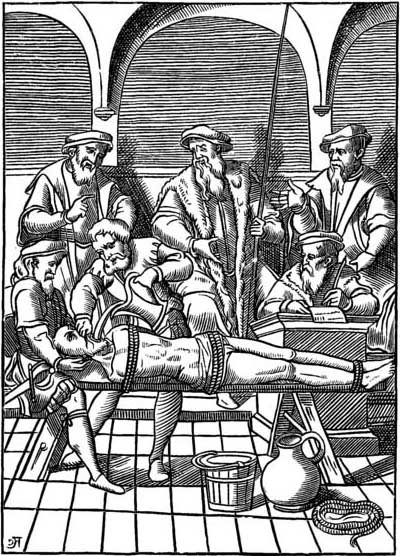 It might be worth remembering that the officials of the Roman Inquisition banned and frequently burned works by Copernicus, Galileo, and others, including religious Jewish texts.

That, however, was small fry (sorry) next to what else they burned.

Mirus’ depiction of the Roman Inquisition as a kind of Internal Affairs unit is eye-popping. For every nominal Catholic clergyman prosecuted by the inquisitors (such as Giordano Bruno, a friar who was burned at the stake for correctly stating that the Sun is another moving star), there are several victims who didn’t fulfill any ecclesiastical roles. Among them are the miller Menocchio (burned alive for blasphemy) and the philosopher-poet Tomasso Campanella (jailed for opinions at variance with Catholic doctrine).

The rest (and the essence) of Mirus’ piece is a plea for restoring canon law — that is, “internal prosecution of ecclesiastical persons.”

When false doctrine, liturgical aberrations, greed, and personal abuse go unpunished, it is a failure of both justice and effective governance. This is true even when something is done behind the scenes, such as causing an ecclesiastical person to disappear quietly, perhaps through timely retirement. I’ve said for years that as a matter of both justice and effective management, serious guilt demands that heads roll, and that the rest of us see them rolling.

Back when the Church’s judicial system was effective, if the Church found an ecclesiastical person guilty of a serious crime which ordinarily fell to secular authority to punish, the Church could strip those she convicted of the benefit of clergy, “relaxing” them to the secular arm. All the options were open, and the Church led the way. But the key point is this: The Church absolutely must bear the responsibility of keeping her own house clean.

To Mirus’ credit, he seems to want to seriously stamp out the Catholic Church’s most outrageous practice: the institutional protection given to pedophile priests and other abusers. He calls out Cardinal Mahony on “his mishandling of the notorious sexual abuse committed by Fr. Nicolas Aquiler-Rivera” (actually, the rapist’s name is Nicolás Aguilar Rivera, but I’ll stop being a pedant now).

“Inquisition” can no longer be the term of choice.

No, it can’t. That word is just a touch tainted. Sorry about that.

But I propose a Church which takes responsibility for its personnel by prosecuting, trying, and convicting those who seriously and systematically violate the rights of those they have been charged to serve.

I admire the clarity. But what’s bizarre to me is that, while most of us have been clamoring for more and harsher secular justice for child-raping priests, Mirus seems to think that Church tribunals are the way to go.

There is precious little in the self-dealing history of the corruption-plagued Catholic Church that should give us one iota of confidence in its ability to self-police.

Most of all, the victims do — and I don’t mean after papal investigators and magistrates have completed their own (ahem) prodding and probing. (Were we to leave it up to the men of God, I predict foot-dragging, glacial progress, and, in some cases, disappearing evidence.)

Bringing back any form of benefit of clergy — which translates to “all are equal, but priests are more equal than others” — is a deluded, seriously out-of-touch proposal.

The Church has had its chance for, oh, the past fifteen hundred years. It may very well bleat that this time, the padres really mean it, but the rest of us would be dunces to take it on faith.

February 26, 2014 How the Devil Takes His Cues From Cell Biology
Browse Our Archives
What Are Your Thoughts?leave a comment