In May of last year, a man who’d become famous for his Jesus-inspired music became a lot more famous when it emerged he’d tried to hire a hitman to kill the mother of his three children.

Now Tim Lambesis has made a confession, reports the New York Post. 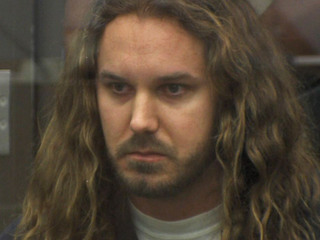 A Grammy-nominated heavy metal Christian rocker confessed his biggest sin Tuesday, telling a California court he tried to have his estranged wife murdered.

Tim Lambesis, the 32-year-old lead singer of the band As I Lay Dying, could face up to nine years in prison for asking a personal trainer at his gym last April to off Meggan Lambesis.

“He wanted to know if maybe I could find someone to do it for him,” the trainer, Brett Kimball, testified at a pretrial hearing, KNSB-TV reported.

Kimball tipped off cops, who sent an undercover to meet with the heavily tattooed, long-haired rocker from Carlsbad, California. Lambesis met the undercover, San Diego County Sheriff’s Deputy Howard Bradley, and handed over $1,000 cash for expenses, as well as his wife’s address, including gate codes and pictures of her.

More details of the plot here, including the tidbit that Lambesis’s wife Meggan says that her husband had ended their marriage in the months before he put a hit out on her.

Meggan claimed that Tim announced the end of their eight-year marriage by e-mail.

Not a very Christian thing to do, but then, neither is murder.

In the months leading up to the incident where Lambesis found himself in the clandestine meeting, it came out that [he] had been unfaithful to his wife and marriage, abusing steroids, and obsessively lifting weights. Bizarrely, his legal team found a way to spin his bad behavior into a defense, citing his actions as the result of the steroids instead of a blatant indication that Tim’s just a really shitty dude.

Sentencing is on May 2nd.