Over the last month, I wrote a few posts about how administrators at Pisgah High School in Canton, North Carolina were refusing to allow the formation of an atheist club run by 15-year-old Kalei Wilson (pronounced KAY-lee). They caved in days later, presumably from all the bad publicity:

It took letters from both the Secular Student Alliance and the Freedom From Religion Foundation (along with the ACLU of North Carolina) to convince school officials to change their minds.

The last time I spoke to Kalei, she told me she would be meeting with her principal to discuss the process of forming the group. Nearly a dozen students had expressed interest in joining the club and a couple of faculty members told her they would be glad to sponsor it.

But that all came to a halt yesterday.

Kalei had started a fundraiser for her group online, already raising a remarkable $500… but an update to her fundraising page now says the money will be returned to donors as Kalei will no longer continue with the organization: 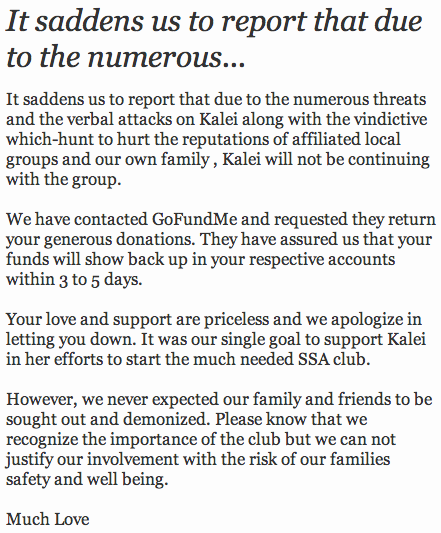 It saddens us to report that due to the numerous threats and the verbal attacks on Kalei along with the vindictive which-hunt to hurt the reputations of affiliated local groups and our own family , Kalei will not be continuing with the group.

We have contacted GoFundMe and requested they return your generous donations. They have assured us that your funds will show back up in your respective accounts within 3 to 5 days.

Your love and support are priceless and we apologize in letting you down. It was our single goal to support Kalei in her efforts to start the much needed SSA club.

However, we never expected our family and friends to be sought out and demonized. Please know that we recognize the importance of the club but we can not justify our involvement with the risk of our families safety and well being.

I attempted to get in touch with Kalei last night to get more details but haven’t heard back yet. Of course, no one thinks any less of her for choosing this path; her safety is far more important than the formation of an atheist group and she’s shown plenty of courage throughout this ordeal. But if there are threats, I hope they’ve been reported to both school officials and local police. No one — atheists, Christians, anyone — should have to deal with this sort of retaliation from other people because of who they are or what they believe.