Louisa Hodkin and Alessandro Calcioli love each other and decided to spend their lives together. They got married in London yesterday. 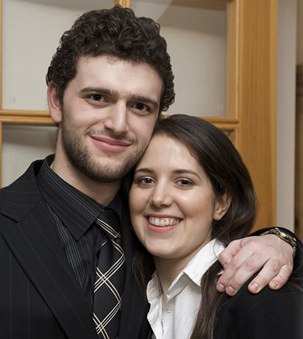 That wasn’t as straightforward as it sounds.

The pair are Scientologists. In a headscratcher of a decision, Britain’s Supreme Court ruled in 1970 that Scientology services are not “acts of worship.” Louisa and Alessandro wanted to get married in a Church of Scientology chapel in London, but a government official denied the application:

… [T]he Registrar General of births, deaths and marriages refused to register the chapel to conduct marriages because it was not recognized as a place of “religious worship.” That decision stemmed from a 1970 court case which excluded Scientology because it did not fit within the terms of the 1855 Places of Worship Registration Act which counts only groups which revere a “deity” as true religions.

Ms Hodkin and Mr Calcioli, both 25 and from East Grinstead, West Sussex, said: “It has been a long, five-year battle to achieve a simple freedom — the right to marry in our own church with a service in accordance with the rites and customs of our religion and surrounded by our friends and family.”

I see Scientology as virtually synonymous with hucksterism, but I sure wouldn’t want to decide where, in the absence of coercion, hucksterism ends and holiness begins. And I want even less for government to get involved in that.

Right after the Golden Rule, the most laudable guideline in the world is “different strokes for different folks.” Whether two people want to get married in a Catholic cathedral, in Billy-Bob’s Fish Shack, in a Scientology chapel, in the Church of the Cosmic Teapot, or in a meadow in the open air, I see no reason for government to stand in their way.

When it does, and on such capricious grounds — favoring one religion over another, or any religion over none — I should hope that we all rise in opposition.

Congratulations to Louisa and Alessandro — both on tying the knot and on making the world a freer place.

February 24, 2014
This Christian Conference About 'Rising Up' Through Jesus Will Feature a Paralyzed Keynote Speaker
Next Post