What My Christian School Taught Me About Atheism February 23, 2014 Hemant Mehta

What My Christian School Taught Me About Atheism

This is a guest post written by Jonny Scaramanga.

ACE schools don’t have teachers, they have “supervisors” and “monitors.” Most of the week, the children work in isolated cubicles called “offices,” completing worksheets (“PACEs”) that incorporate Bible lessons into every academic subject. If they need help, they raise one of two flags. The Christian flag will bring a supervisor who (in theory) helps with academic questions, while the national flag summons a monitor, who gives permission to do stuff like go to the bathroom or score their work (students mark their own work from answer keys). Since ACE students can’t do anything without permission, monitors are busy.

Because they think it’s a great way to teach “responsibility,” it’s common for schools to train older children as monitors. They lured us in by counting it as an extra half-credit towards ACE’s worthless high school diploma, and it had the added bonus of gaining the school a bunch of unpaid staff. Back in my day (1998), monitor training consisted of eight PACEs, which took five days. Training to become a supervisor was exactly the same, except you had to go to an approved training center and attend some seminars. ACE has since made the training process even more super-efficient, and you can now go from an unqualified nobody to a fully recognized ACE supervisor in four days. That’s the only training you need. Or, as they put it in 1980:

Although a B.S. degree in education is preferred, the only requirement is a B.A. (Born Again) in Salvation!

I can confirm that my supervisors did indeed appear to have degrees in BS.

I completed ACE monitor training when I was 13 years old. I scored 100% on all eight tests; that’s how difficult it isn’t. I learned many interesting things, like the fact that children and parents alike cannot be trusted. But the thing that has stayed with me the most is what I learned about atheists.

Personally, if I were writing a training course for teachers with only five days to cover everything, I don’t think I would include much about atheism. Somehow, ACE found the time. I learned that Stalin and Hitler were both atheists, and that their evil acts were the logical conclusion of their unbelief. “We’re talking about a lifestyle of atheism and a destruction of truth and reality that does not pay off,” read the training book, which was actually a transcript of a sermon by ACE’s founder.

Communism, atheism, and evolution were treated as interchangeable terms. I read, “communism and atheism have proved themselves false and opened the door to the realities of the truths that I just shared about the Bible.”

But the absolute slammer was this. It’s so good I’ll quote it in full: 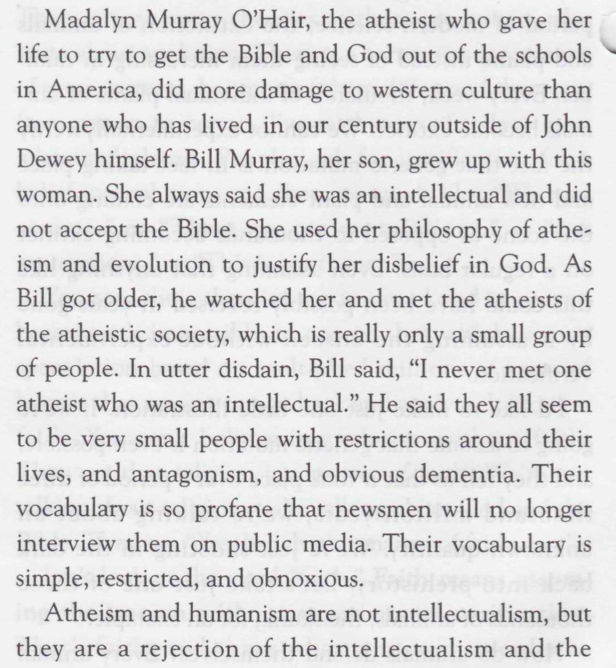 Madalyn Murray O’Hair, the atheist who gave her life to try to get the Bible and God out of the schools in America, did more damage to western culture than anyone who has lived in our century outside of John Dewey himself. Bill Murray, her son, grew up with this woman. She always said she was an intellectual and did not accept the Bible. She used her philosophy of atheism and evolution to justify her disbelief in God. As Bill got older, he watched her and met the atheists of the atheistic society, which is really only a small group of people. In utter disdain, Bill said, “I never met one atheist who was an intellectual.” He said they all seem to be very small people with restrictions around their lives, and antagonism, and obvious dementia. Their vocabulary is so profane that newsmen will no longer interview them on public media. Their vocabulary is simple, restricted, and obnoxious.

Atheism and humanism are not intellectualism, but they are a rejection of the intellectualism and the greatness of the mind of man — a mind with the ability to see and understand a God far beyond his human comprehension. [Emphasis mine]

ACE’s staff training program has been overhauled since my day — the most recent revision was 2011. One of my blog readers was kind enough to purchase and send me the latest edition, and guess what? The above quotation is almost unchanged.

The training PACEs are packed with gold (another gem: “A rational mind will not accept the theories of evolution because they are pure speculation”). But what really concern me are the arguments used to justify ACE’s philosophy of education. ACE says that, to qualify as “true” education, all education must start with four presuppositions:

Although they call these “presuppositions,” the text does attempt to justify each one. And the justifications are awful. Even if the presuppositions were true, these would still be appalling arguments. They are (paraphrased for brevity):

If teachers are accepting these fallacious arguments, presumably they believe this is valid reasoning. If this is what they are modeling for their students, I worry about the impact on students’ ability to think rationally in other areas, too. I know my reasoning was extremely faulty. I wasted a fortune on alternative medicine in my early 20s, and I don’t think it’s a coincidence that many defenses of homeopathy exhibit the same “logic” as Creationist arguments.

It scares me that people who think these are good arguments are responsible for children’s education, and it worries me more that this is sometimes taught directly to the students. We could take a giant step forward simply by requiring all teachers to have accredited qualifications.

Jonny Scaramanga is a PhD student at the Institute of Education, London. He blogs at Leaving Fundamentalism.

February 23, 2014
Is It Child Abuse to Teach Religion to Your Children?
Next Post

February 23, 2014 Columnist Says That To Reinvigorate Failing Churches, Christians Should Try Harder To Push Their Faith On Others
Browse Our Archives
What Are Your Thoughts?leave a comment