Columnist Says That To Reinvigorate Failing Churches, Christians Should Try Harder To Push Their Faith On Others February 23, 2014 Terry Firma

Columnist Says That To Reinvigorate Failing Churches, Christians Should Try Harder To Push Their Faith On Others

The Item is a small newspaper in South Carolina that occasionally publishes the thoughts of a faith columnist called Jamie Wilson. In her latest piece, quoted approvingly by the Christian Post, Wilson says that dwindling church attendance can be reversed with more aggressive proselytizing.

That’s right. Churchy people need to become more extroverted, gosh-darnit! They should overcome their legendary reticence to yammer on about their faith already! They ought to finally get comfortable buttonholing people, and laying Jesus trips on them! 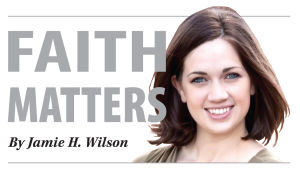 Recent generations are no longer bound by a sense of responsibility to be a part of a body of believers. Rather than attend a weekly worship service, more and more are staying home. …

I believe introverted churches are the main reason numbers are decreasing across the nation. We have forgotten the call to go and tell others. The main mission of our church isn’t to maintain our current population but to reach others and bring them into the body of the church. … In a spirit of uncompromising truth, we can turn our focus to the unchurched population around us.

Imagine if 50 people in your congregation committed to telling one person about his or her faith each day in the month of March. By the end of the month, 1,550 people would have heard a message of faith. Let’s say just 25 percent are personally changed by that message. In just a month’s time, 387 people would have understood some element of their need for faith. In a community desperate for that message, we can’t afford to look past those numbers.

“Desperate for that message.” Wow. Honestly, the only thing I’m desperate for is for people like Wilson to finally leave me and everyone else alone, please.

But let’s look at her overall point, which is that churches are emptier than ever because there’s not enough proselytizing going on.

Wilson conveniently forgets that hundreds of ostensibly pious Congresscritters will mention Jesus at every turn for fun and profit.

Wilson doesn’t mention that regional American newspapers, especially south of the Mason Dixon line, are saturated with precisely her kind of Praise-the-Lord prose.

Wilson gives no thought to the fact that we live in a country where it’s apparently acceptable for medical professionals to try and convert you while you’re under their care; where disruptive campus preachers are permitted to screech hellfire at students, day after day; and where high schools habitually push Jesus on their athletes and other students.

I’ve said this before, but for the benefit of wannabe proselytizers, I’ll repeat myself (listen up, Jamie!).

Christians who engage in your proposed brand of conversionist fervor probably feel quite pleased with themselves. But here’s the thing: the rest of us see you not as gentle ambassadors of your faith, but as overbearing browbeaters we’d do almost anything to avoid.

Spreading your religion (should you deem it necessary at all) can be accomplished by getting as close as you can to leading an exemplary life, full of small acts of neighborly kindness. Those are the Christians I can love and respect. Be amiable, soft-spoken, and introspective. If your God brings you peace and joy, I’m happy for you.

But know that when your evangelical zeal kicks in, and you try to talk me into joining your pervasive cult — about whose exalted rightness and righteousness I must hear every day as it is — you lose me. Us. Millions of us.

Even those who are confused seekers, seemingly ripe for your picking, will probably notice the breezy nerve with which you operate, and conclude that your god is one who attracts showboats, and grandstanders, and also well-meaning people who fall really short in the humility department.

By the way, Jamie, that number of likely converts you tout — 25 percent of those approached — is clearly completely made up. We both know that. But as long as you’re tossing out unsubstantiated guesses, I’ll join you, and I’ll predict (more accurately, I’d wager) that your success rate will be closer to one half of one percent, with the remaining 99.5 percent even less inclined than before to join your Happy Jesus club.

So for the love of what’s good, give it a rest. It’s a new millennium. You and your posse can no longer badger your way to success. You want to win people over, get their respect? Great, but you’re going to have to earn it the hard way — by being the most excellent, non-shitty human being you can be. That means you’ll have to stop pretending we all want to buy what you’re selling. ‘Cause we don’t.

I wish you luck.

February 23, 2014
What My Christian School Taught Me About Atheism
Next Post