Jerry Boykin Believes in the Return of Rambo Jesus — and Says That the Savior Wants You To Buy an AR-15 February 22, 2014 Terry Firma

Words fail, so I’ll just let this speak for itself. It’s the just-surfaced audio of a speech that Jerry Boykin, executive vice president of the Family Research Council, delivered at the WallBuilders’ Pro-Family Legislators Conference in November: 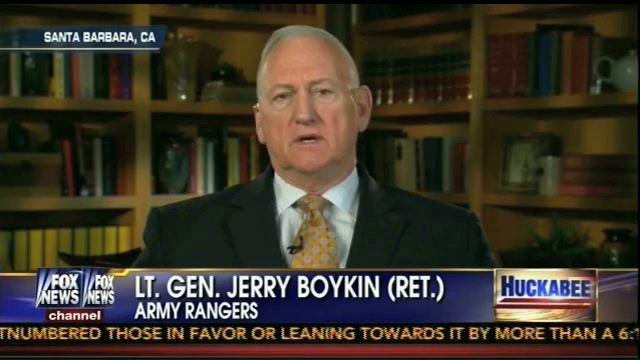 The Lord is a warrior and in Revelation 19 it says when he comes back, he’s coming back as what? A warrior. A mighty warrior leading a mighty army, riding a white horse with a blood-stained white robe … I believe that blood on that robe is the blood of his enemies ’cause he’s coming back as a warrior carrying a sword.

And I believe now — I’ve checked this out — I believe that sword he’ll be carrying when he comes back is an AR-15.

Now I want you to think about this: where did the Second Amendment come from? … From the Founding Fathers, it’s in the Constitution. Well, yeah, I know that. But where did the whole concept come from? It came from Jesus when he said to his disciples, ‘Now, if you don’t have a sword, sell your cloak and buy one.’

I know, everybody says that was a metaphor. It was not a metaphor! He was saying ‘In building my kingdom, you’re going to have to fight at times. You won’t build my kingdom with a sword, but you’re going to have to defend yourself.’ And that was the beginning of the Second Amendment, that’s where the whole thing came from. I can’t prove that historically and David [Barton] will counsel me when this is over, but I know that’s where it came from.

And the sword today is an AR-15, so if you don’t have one, go get one. You’re supposed to have one. It’s biblical.

(Thanks to Benjamin Corey for the link)

February 22, 2014
Christian Columnist: Liberal Activists Are Like Men in 'Trench Coat[s] Trying to Give Candy to a Child'
Next Post