Candidate for Lieutenant Governor of Texas Wants You to Vote for Him Because… Jesus February 20, 2014 Hemant Mehta

State Senator Dan Patrick, a radio talk show host from Houston, is currently running for Lieutenant Governor of Texas. He already voiced his support for teaching Creationism in science classes during a televised debate last December, where he added, “The breakup of the family in this country has started when we took God out of the classroom.”

Now, his latest campaign ad educates voters on what really matters: His record. His policies. His platform. God. 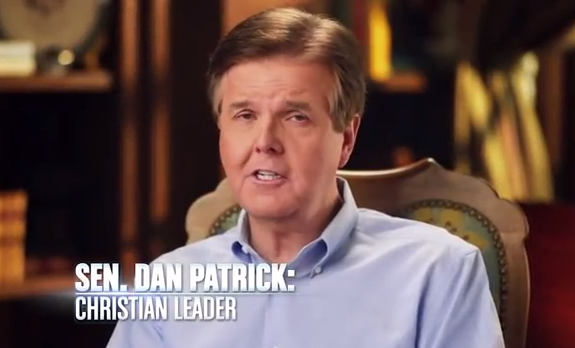 I’m a Christian first, a conservative second, and a Republican third. My faith means everything to me. That’s why I placed “In God We Trust” in the Senate and “Under God” in our State Pledge. I helped build the first prison seminary and passed the sonogram bill that could save 15,000 babies’ lives this year. I honor God first, not government. That’s why I’ll fight against Obama’s attacks on the Texas conservative values that we share.

I get that he’s appealing to his base, but he’s making it very clear that he will not represent Texans who don’t already adhere to his beliefs. There’s no indication that he gives a damn about anyone outside his tribe. If anything, he just has contempt for them. (I’m an open-minded guy fifty-seventh.)

This is a perfect example of how easy it is to be a Christian in certain parts of America. You can run for office knowing that you have a good chance of getting elected based solely on your religious beliefs. It’s not just that you’re comfortable being public about your Christianity; you can put it at the front and center of your campaign. Non-Christians don’t get to enjoy that privilege. We have to hide our beliefs and hope voters pay attention to our take on the issues. (Silly us.)

I’m surprised Patrick hasn’t named Jesus as his campaign manager yet, but I wouldn’t put it past him.

(Thanks to @senorbuckwheat for the link)

February 20, 2014 Teflon Ex-Archbishop Roger Mahony, Despite Illegal Scheming in Child Sex Abuse Scandal, is Unlikely to Face Charges
Browse Our Archives
What Are Your Thoughts?leave a comment