If Alaskan Republicans get their way, then taxpayers will soon be footing the bill for students who attend religious schools.

As it stands, the state’s Constitution forbids that. Article 7, Section 1 states:

No money shall be paid from public funds for the direct benefit of any religious or other private educational institution. 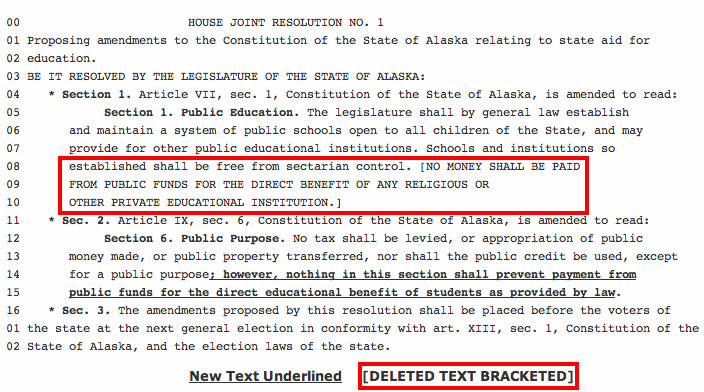 That change could open the door to a full-blown voucher system in which money would be taken away from public schools in order to be given to private schools, including religious ones:

If they did, Alaska would become the second state in the nation to repeal its provision against public money in private education, after Louisiana, where voters removed such language from their constitution in 1973.

Michelle Theriault Boots of the Anchorage Daily News has more details about the nature of this debate.

You may recall that a similar program in Louisiana (allowing for taxpayer funding of religious schools) passed a few years ago… and caused a bit of a commotion when one Republican legislator found out the money could also be used to pay for Islamic schools, too:

Rep. Valarie Hodges, R-Watson, says she had no idea that Gov. Bobby Jindal’s overhaul of the state’s educational system might mean taxpayer support of Muslim schools.

“I actually support funding for teaching the fundamentals of America’s Founding Fathers’ religion, which is Christianity, in public schools or private schools,” the District 64 Representative said Monday.

“Unfortunately it will not be limited to the Founders’ religion,” Hodges said. “We need to insure that it does not open the door to fund radical Islam schools. There are a thousand Muslim schools that have sprung up recently. I do not support using public funds for teaching Islam anywhere here in Louisiana.”

The Alaskan bill has a long way to go: To make a change to the Constitution, two-thirds of both chambers of the state congress must approve it, and that’s all before voters get their say. Considering it’s a political landmine to vote in favor of taking funding away from public schools, I hope most politicians will just say no. But it’s not a done deal by any means. On Monday, a rally at the state Capital was attended by supporters of public education.

If you live in the state, be sure to contact your representatives and urge them to vote against this awful legislation.