A Christian Filmmaker, Encouraged By His Atheist Friend, Goes Looking For Answers in ‘My Week in Atheism’ February 20, 2014 Terry Firma

A Christian Filmmaker, Encouraged By His Atheist Friend, Goes Looking For Answers in ‘My Week in Atheism’

Pastor Ryan Bell, trying to get better acquainted with the atheist world, recently started immersing himself in it for one year. John Christy, another devout Christian, is at least 1/52nd that committed. He did the same thing, but initially for just a week; that engagement began to stretch toward a year, though, once he decided to make a documentary about his experiences, called My Week in Atheism.

John Christy, a devout Christian filmmaker and student of religion, and David Smalley, an atheist activist and radio host, have released a new documentary film they made together, “My Week in Atheism,” about their friendship caught between the two opposing worldviews.

The film premiered over the weekend at the Crest Theater in Sacramento, Calif., showing the two traveling together to secular conventions, university campuses, and a live talk show, and how they maintain a close friendship while protecting their worldviews and activism.

“The way the world is today, people too often view others with different beliefs as their enemies. But David and I have developed a deep friendship — even though we talk, and argue about religious differences all the time,” said Christy in a statement.

“As I’ve gotten to know David more, I appreciate his challenge to my faith. Rather than digging in my heels to defend myself, I’ve tried to take an honest, intellectual look at what motivates atheism and why I believe what I believe,” added Christy, who has a B.S. in Religion and Theological Studies and plans to get an M.A. in Christian and Classical Studies in 2015. 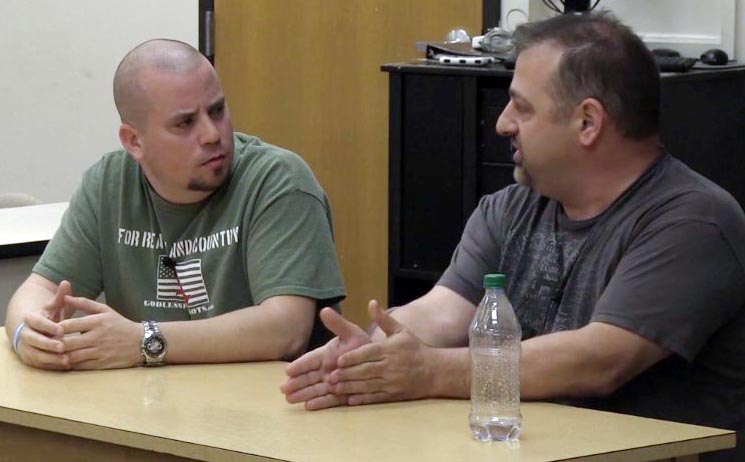 I asked a Friendly Atheist regular, Richard Wilson, who was at the premiere, for his feedback. Here’s his take, in part:

I [feel] the film was fairly edited. That is, there were no out-of-context quote mines as we’ve seen from Ray Comfort or Ben Stein. I’m comfortable assuming that everybody in the film would say they were presented fairly and fairly completely. For that reason, I think this is good film for Christians who are struggling with [who] atheists really are, and what atheism in general wants as a movement. … It’s certainly not going to make anyone an atheist, but it’s not really the point. No matter the billing, this isn’t a debate film, and it doesn’t attempt to settle any theological questions.

So, maybe good for Christians, perhaps as a coming-out gift from an atheist family member.

But what about for atheists? There’s certainly nothing new here to any atheist who knows who David Silverman, Matt Dillahunty or Aron Ra are. If you’ve heard them make their cases, you’ll know the material. … John gets high praise throughout the film for honestly listening and challenging his beliefs. The running joke is that with the questions he’s asking, there’s no way he can be an atheist at the end. Personally I didn’t find myself caring if John became an atheist or not. The film wasn’t really about John checking his own beliefs, so much as trying to learn what atheists are and where they’re coming from. On that measure I think it did better than any other Christian venture I can think of.

Christy said his goal with this film is “to encourage viewers to examine the foundation of their beliefs whether Christian, atheist, or undecided.” “Being pushed to explain my Christian faith has led me to a deeper understanding of the Bible and its applicability to everyday life situations,” he noted.

Smalley said he wants discussions to happen and “people to know that atheists aren’t necessarily anti-Christian. We can talk with our loved ones who have a differing worldview or interpretation, and explain ourselves assertively without dividing families or friendships.”

My Week in Atheism, which runs for 110 minutes, is available to stream via Vimeo On Demand. You can also order physical copies — DVD or Blu-ray — here. The documentary is bound to be a good conversation piece in any open exchange between believers and skeptics.