Pat Robertson on Gay Sex: ‘When You See What They Do, It’s Not Very Pretty’ February 19, 2014 Camille Beredjick

Pat Robertson on Gay Sex: ‘When You See What They Do, It’s Not Very Pretty’

On Tuesday’s episode of The 700 Club, Robertson responded to a question from a viewer about why he thinks homosexuality is a sin. Right Wing Watch tracked down the hilarious clip: 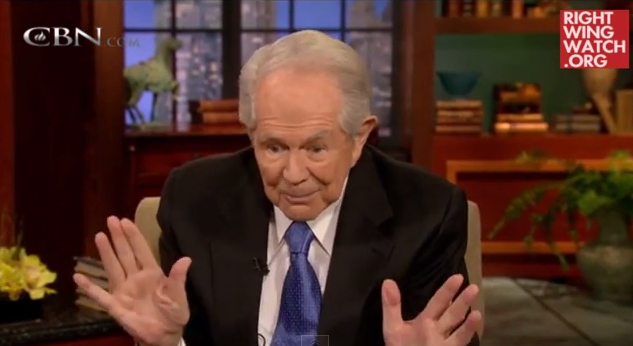 Robertson says that same-sex “tendencies,” or attractions, are okay… as long as you don’t actually have sex with a person of your own sex. That’s when things get, well, messy. Apparently Pat knows this firsthand:

“I don’t want to get graphic — that guy on Duck Dynasty got graphic and it got a little disgusting — but when you see what they do, it’s not very pretty.“

Whoops! I really wish he’d gone into more detail there. Or at least contrasted that with the sex that he does find pretty… He then throws in the tried-and-tired excuse that marriage must be between a man and a woman because the only purpose of marriage is to procreate:

“Nobody can ever produce a child through homosexual sex or lesbian sex, you cannot do it. This is for procreation and God has said that those who violate it, the land will vomit them out.“

I’m sorry, will God’s land “vomit out” all the elderly couples or infertile couples or childless-by-choice couples out there? Even those who are as straight and/or Christian as can be? Dear old Pat probably wouldn’t have much to say about them. In good conservative Christian fashion, we pretty much only apply those procreate-or-bust rules when they’re convenient — A.K.A. when they can be used to bash gay people.

Whatever, man. Keep talking about the gay sex you’ve seen. I’m all ears.

February 19, 2014
Greta Christina's New Book About Coming Out as an Atheist is Now Available for Preorder
Next Post