Devil Who Looks Like Obama Is Cut From ‘Son of God’ Movie; Producers Still Insist U.S. is a ‘Biblical Nation’ February 19, 2014 Terry Firma

Devil Who Looks Like Obama Is Cut From ‘Son of God’ Movie; Producers Still Insist U.S. is a ‘Biblical Nation’

One of the big media dustups of 2013 occurred when people watching the History Channel’s miniseries The Bible noticed an uncanny similarity between Satan (portrayed by Moroccan actor Mohamen Mehdi Ouazanni) and a certain politician: 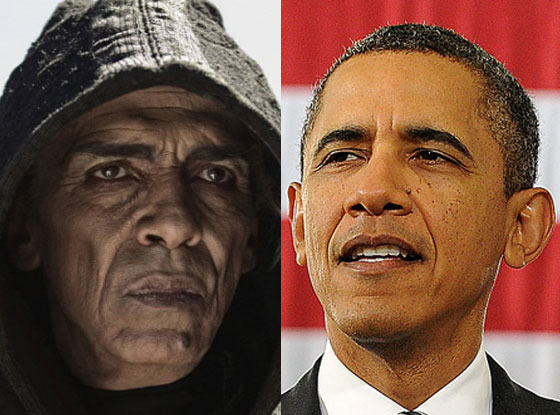 When producers Mark Burnett and Roma Downey rejiggered their original footage for a 135-minute feature film called Son of God, out next week, the devil ended up without a single scene. The husband-and-wife duo

… told The Hollywood Reporter that the character has been cut out in order to avoid stirring up controversy once again.

“It gives me great pleasure to tell you that the devil is on the cutting-room floor. This is now a movie about Jesus, the son of God, and the devil gets no more screen time,” Downey told THR. “For our movie, Son of God, I wanted all of the focus to be on Jesus. I want his name to be on the lips of everyone who sees this movie, so we cast Satan out.”

The sequel to The Bible miniseries will eventually air on NBC. Burnett told the press last year that the story he can’t get enough of is important to Americans because

“The Bible is the foundation of this nation, of our laws, of our society. There wouldn’t have been the Declaration of Independence. President Obama swore his allegiance to all of us not on one Bible, [but] on Dr. Martin Luther King Jr.’s Bible and Abraham Lincoln’s bible last month. It’s on our money: ‘In God We Trust.’“

To me, that just drives home that there’s value in making sure the U.S. government operates in a strictly secular fashion. Once we no longer balk at “In God We Trust” on our money, and we don’t raise any eyebrows when lawmakers use the Bible as the printed proxy for ethical behavior, these things become themselves proof positive that America is “a Biblical nation.”

Burnett’s propaganda offensive notwithstanding, most Americans don’t choose to live in a theocracy in sheep’s clothing. He is, as they say, entitled to his opinion, but not to his facts.