In India, reincarnations of Hanuman, the Hindu monkey god, have been proliferating like shopping-mall Santas. The latest example: Chandre Orean, 35, from West Bengal, who gives daily blessings to devotees in a small shrine at his home. He and Hanuman are totally like twins: 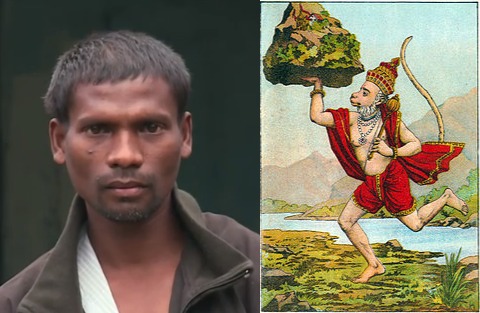 “My brother’s son has been very well unwell and runs a fever,” says the young woman at 0:50. “We have been giving him medicine but it hasn’t helped, so we came to Chandre to seek his blessings.”

At the end, you can hear the God-man saying he wants to build a temple to receive more followers, pleading, “I am a poor man, so I am looking for some help.”

He’s got competition from this kid:

Also, this one, and this one.

Several types of growths or cysts can form on the end of the human tailbone. Sometimes the phenomenon is a symptom of spina bifida.

But never mind the science: all the human “monkey gods” in India are nicely equipped to take advantage of wide-eyed believers by turning a fake tail into a fake tale.

February 17, 2014
Pro-Life Atheist Speaks to College Group, but Not Without Some Controversy
Next Post