The Daily Beast met up with naturalist and broadcast narrator Sir David Attenborough, 87, and discovered that these days, he turns a tad ornery when the subject turns to superstitious, anti-science stubbornness:

Attenborough has made a career of resisting controversy, often describing himself as “a reporter” with no views of his own. … Once criticized by campaigners for his reticence to address contentious issues, [he] is no longer willing to speak in hushed tones.

Sitting opposite the kangaroo enclosure at London Zoo, he told The Daily Beast he had lost patience with the “ignorance” of creationists, polluters, and climate change deniers. “To simply say that you must accept unquestioningly what you learned at your mother’s knee is not the act of an intelligent person,” he said. 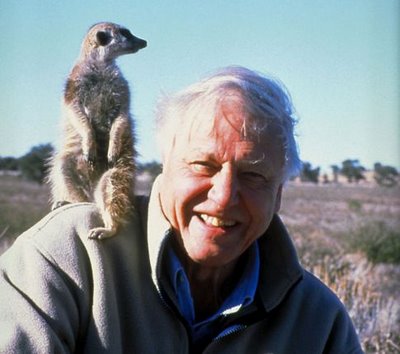 Creation myths are among the things that can exasperate him:

“Every society in the world has found it necessary to produce a story to account for the fact that humanity is on earth,” he said. “The Australian Aboriginals think that the first humans were regurgitated by a great rainbow serpent in the sky, the people in Thailand think the beginning of the world was a huge pool of milk and a snake was pulled by demons, and the milk coagulated and that formed human beings; and there was a time, two and a half to three thousand years ago, when people on the east end of the Mediterranean thought woman was made from the rib of the first man.

“If somebody says to me I believe every word of the Bible is true, you can’t argue against that degree of irrationality… there is actually a way of looking at the natural world and seeing the evidence and it’s all there. And what’s more it’s the same evidence whether it’s in Australia or Northern Europe or wherever. It’s all the same — it all produces the same answer and you can all see the evidence — if you reject that then there’s nothing I can say.”

To be fair, this kind of candor isn’t entirely out of character for him. On the topic of creationism, Attenborough has shown flashes of puzzlement and irritation before. Years ago, he said this:

When creationists talk about God creating every individual species as a separate act, they always instance hummingbirds, or orchids, sunflowers and beautiful things. But I tend to think instead of a parasitic worm that is boring through the eye of a boy sitting on the bank of a river in West Africa, [a worm] that’s going to make him blind.

And [I ask them], ‘Are you telling me that the God you believe in, who you also say is an all-merciful God, who cares for each one of us individually, are you saying that God created this worm that can live in no other way than in an innocent child’s eyeball? Because that doesn’t seem to me to coincide with a God who’s full of mercy.

It remains a favorite quote of mine today.