Irish Broadcaster Falls For ‘a Neat Orwellian Trick,’ Agrees That Homophobes May Be the Real Victims of Homophobia February 13, 2014 Terry Firma

Irish Broadcaster Falls For ‘a Neat Orwellian Trick,’ Agrees That Homophobes May Be the Real Victims of Homophobia

That would be unremarkable in most of the developed world, and a legally protected opinion to boot. But in Ireland, not so much.

[O’Neill] was threatened with legal action for defamation by the writer John Waters …, by the [conservative Catholic] Iona Institute, who made the video [that O’Neill had criticized], and by Breda O’Brien, an Irish Times columnist.

Here, by the way, is the Iona Institute’s video.

I’m not sure that I’d characterize it as an example of outright homophobia, and I acknowledge that that’s a sledgehammer of a word. But … so what? In democracies run by grownups, raucous language is part of the give-and-take of public debate. It would be different if O’Neill had falsely accused people of some crime. But calling anti-gay activists “homophobes” is a completely valid perspective, especially coming from someone who has experienced the sting of anti-gay prejudice hundreds of times.

I just watched O’Neill, in full drag, address the matter in front of a theater audience. It’s pretty moving. Skip to 6:29 to see the part where she gets down to business. 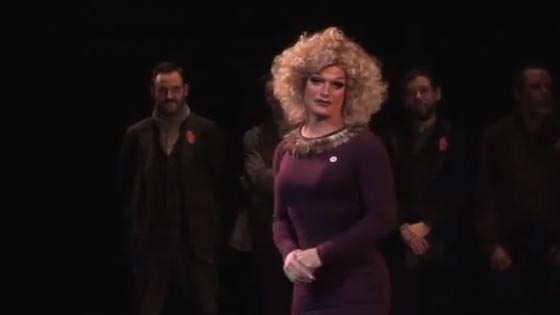 RTÉ, in its wisdom, decided incredibly quickly to hand over a huge sum of money to make it all go away. I haven’t been quite so lucky.

And for the last three weeks I have been denounced from the floor of [the Irish parliament] to newspaper columns to the seething morass of internet commentary — denounced for using ‘hate speech’ because I dared to use the word homophobia. And a jumped-up queer like me should know that the word homophobia is no longer available to gay people. Which is a spectacular and neat Orwellian trick, because now it turns out that gay people are not the victims of homophobia — homophobes are.”

The other day, in the Guardian, Emer O’Toole pointed out that, instead of pretending to be the persecuted party, conservative Catholics ought to take a good share of the responsibility for relegating gay people to second-class-citizen status, and added

I’m sure it’s unpleasant to be accused of homophobia when you’d rather see yourself as traditional but tolerant. But it is much harder to be gay in 21st-century Ireland. To experience a denial of marriage rights on the basis of your sexuality is to experience homophobia, and Ireland’s LGBTQ communities deserve far better of the state broadcaster.

Agreed on both counts.