The Nudist Church: No Fig Leaves For This Congregation February 12, 2014 Terry Firma

The Nudist Church: No Fig Leaves For This Congregation

At the church that’s situated in the White Tail Nudist Resort in Virginia, you can come just as God made you before He gave you underpants. 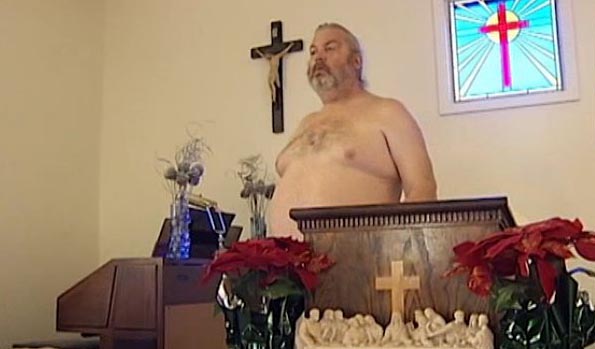 This is a congregation that often worships the same way god brought them into the world, unadorned — and unashamedly naked.

This however, is February, so on this Sunday morning, parishioners are in various states of undress. Some nude, some fully clothed, others topless.

In the winter, the Sunday service is barely half full, but in the summer it’s standing room only.

For the record: I have no problem whatsoever with what these people do, and I imagine that, compared to the rest of us, they view each other’s bodies, and their own, in a much less anxious and judgmental way.

As I watched the video, I did wonder how the outside world would react if a group of atheists congregated this way. The denizens of the White Tail Church, it seems to me, are perceived as mere oddballs, whereas a nudist get-together of non-believers would probably be viewed as something darker — prima facie proof of immorality, a harbinger of Satanic fornication, and what have you.

February 12, 2014
South Carolina State Senator Stops Evolution Standard from Being Adopted Because He'd Rather 'Teach the Controversy'
Next Post