National Science Foundation Finds That Americans’ Belief in Astrology Is the Highest It’s Been In 30 Years February 12, 2014 Terry Firma

The spread of rational thinking appears unstoppable, evidenced by how secularization in the United States and Western Europe is continuing at encouraging speeds.

But by some other metrics, things aren’t really going our way.

According to data from the National Science Foundation’s just-released 2014 Science and Engineering Indicators study … the percentage of Americans who think astrology is “not at all scientific” declined from 62 percent in 2010 to just 55 percent in 2012 (the last year for which data is available). As a result, NSF reports that Americans are apparently less skeptical of astrology than they have been at any time since 1983.

Over the years, the GSS [General Social Survey] and other surveys have asked Americans a recurring question: “Would you say that astrology is very scientific, sort of scientific, or not at all scientific?”

A substantial minority of Americans, ranging from 31 to 45 percent depending on the year, consider astrology either “very scientific” or “sort of scientific.” That’s bad enough — the NSF report compares it with China, where 92 percent of the public does not believe in horoscopes — but the new evidence suggests we are also moving in the wrong direction. Indeed, the percentage of Americans who say astrology is scientifically bunk has been declining ever since a high point for astrology skepticism in 2004, when it hit 66 percent. 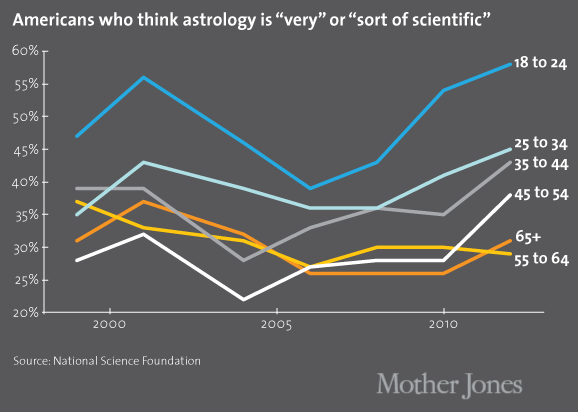 Depressingly enough, the same demographic that is most likely to find religion irrelevant is also most likely to take astrology seriously. In the age group of 18–24, most respondents consider astrology at least “sort of” scientific. By contrast, 50- and 60-somethings are least inclined to believe that the future is somehow written in the stars.

If what Neil deGrasse Tyson says is true — “Science is basically an inoculation against charlatans” — we’d better work harder on improving the chance that science will administer a healthy dose of rationality to the credulous and the dupable.

February 12, 2014
Monthly Exile for Menstruating Hindu Women in Nepal: It's Lonely and Dangerous, 'But the Fear of Sin Is Bigger'
Next Post