An End to Pastagate: Student Union in London Apologizes For Removing Posters of Flying Spaghetti Monster

Remember the posters of the Flying Spaghetti Monster going missing from a freshers’ fair at London’s South Bank University? It was all a misunderstanding caused by an undertrained, overzealous staff member, says the student union responsible from the removal. 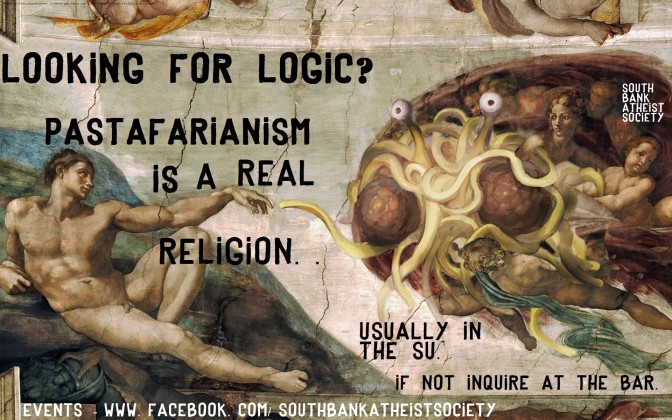 This afternoon, the union released a letter of apology. It reads, in part,

… a Union staff member did remove the poster but did so with a misunderstanding of Union policies. It is not currently nor has it ever been the Union policy to censor student groups or the materials they produce, and as such this was not an authorized act and we have now ensured that staff know that they should not do this. The refusal to reprint the poster was an extension of the same misunderstanding of our process and we have now rectified this.

We have apologized to the Atheist Society for the actions taken and the distress that it has caused. From a Union perspective the ‘Flying Spaghetti Monster’ Poster has not been banned and we have agreed with the Atheist Society to reprint these posters and distribute them on campus for them. They will also be displayed inside the Union’s locked poster boards in order to prevent them being taken down by other students.

We respect that all students are able to have opinions, but as a Union we wish to support the promotion and growth of any Union Society or activity without having to be subjected to harassment by fellow students. We remind students that the appropriate response to opinions they may find offensive is to engage in healthy debate respecting the rights of others to hold views or beliefs differing from their own.

If it’s true that the South Bank University student union has engaged in a longstanding pattern of harassment against the school’s Atheist Society, as asserted on Monday by a prominent non-believer in the U.K., let’s hope that those hostilities are now officially a thing of the past. The statement above is about as clear as it gets (no weasel words), the remedies offered by the union are fair and adequate, and I’m glad the matter appears to be resolved.

I have it on good authority that the union’s censors have also been forgiven by His Noodly Highness (Sauce Be Upon Him). Onwards.

February 12, 2014
National Science Foundation Finds That Americans' Belief in Astrology Is the Highest It's Been In 30 Years
Next Post

February 12, 2014 Pastor Rage-Preaches Against Divorced People Who Get Remarried
Browse Our Archives
What Are Your Thoughts?leave a comment