In a little over two weeks, Josh Ladgrove will take the stage at Adelaide Fringe, an annual open-access arts festival, and piss off tons of people who aren’t even there. In fact, he’s already started doing just that. That’s because the Melbourne comedian, who bears a passing resemblance to Western depictions of Jesus Christ, is scheduled to perform three shows in which he appears before the audience dressed as the Savior and sticky-taped to a cardboard crucifix.

Then, he invites audience members to heckle him on any subject, never knowing where those who oblige will direct him with their taunts and insults.

The title of the always-changing performance? Come Heckle Christ. 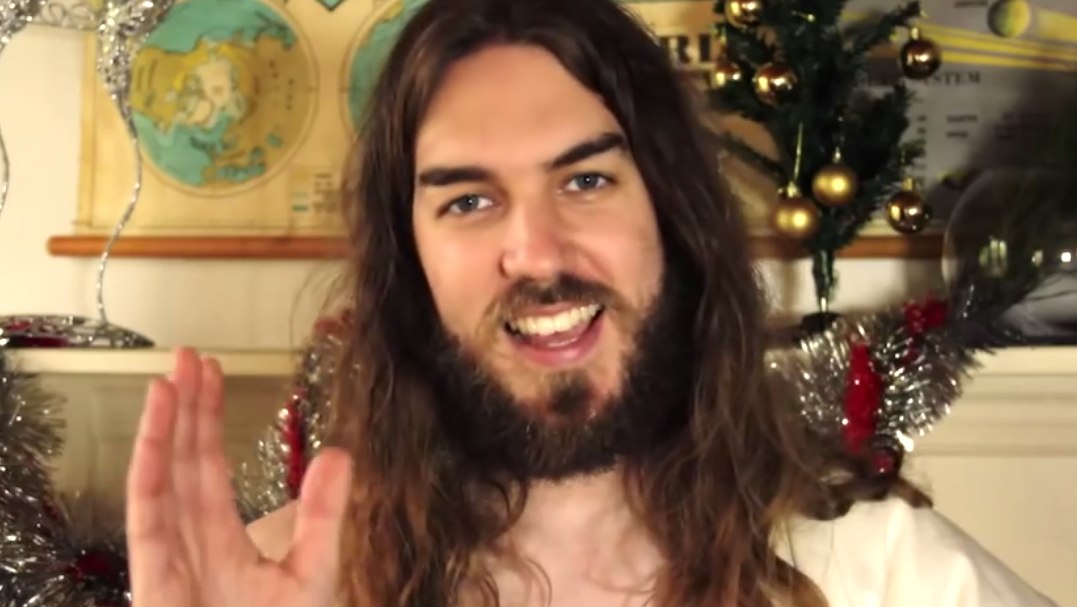 The Guardian reports that

“While I am a strong advocate for freedom of speech and a supporter of the arts, I believe this production is extremely offensive to people of any religious persuasion and insulting to many South Australians,” the letter read.

It’s the usual spiel by wannabe censors: “I’m totes in favor of free speech, but–” … followed by calls to ban stuff the speaker finds offensive.

To prove just how very committed to free speech he is,

The archbishop also wrote to the premier [of South Australia], Jay Weatherill, and fringe sponsors, asking them to intervene before the fringe begins [later this week].

It’s to Weatherill’s credit that he pretty much just shrugged,

… calling the show’s title “juvenile” but suggesting it was best to ignore it.

Since then, other Christian leaders have joined the fray, including the Reverend Fred Nile, party leader of the New South Wales Christian Democrats, who took to Twitter to ask why the South Australian government and a regional bank are “sponsoring antiChristian hate.”

The festival organizer explained that the event is is open to all manner of performers, and rightfully took the “different strokes for different folks” approach.

We encourage anyone that is any way upset by a particular show to not choose to see that show but instead we hope that they go and see one of the hundreds of other shows that they feel maybe more appropriate for them.

The bank added that

Given the open access, non-curated nature of the Fringe, any artist can register an event and be a part of the festival. We sponsor the entire event, but do not examine individual shows, of which there are over 900.

Ladgrove says he is undaunted by the hate mail he’s received from angry Christians.

Many have offered to pray for me, which I think is a very nice thing indeed.

Perhaps a not-so-nice thing is that, according to the conservative website LifeSiteNews, next year’s funding for the festival may be in danger. Also,

Adelaide’s Street Church is looking to take action, regarding the show as “an absolute blasphemy” and comparing it to the mockery received by Christ prior to his crucifixion. Speaking on local ABC Radio, Pastor Caleb Corneloup said they are planning to take artist Josh Ladgrove to court for common law blasphemy, a mechanism that still exists in Australia.

This response from Ladgrove made me laugh out loud:

Ladgrove had previously indicated that he would allow Street Church representatives to attend his show for free, but admitted that this may now be logistically impossible due to the event selling out.

If that’s true, the Streisand effect is alive and well. Then again, when I just checked on ticket availability, seats appeared to be still available for all three of Ladgrove’s heckle sessions, meaning that church members who hope to record the show for use in court could be in luck after all.

February 11, 2014 What's the Most Difficult Biblical Contradiction for Christian Apologists to Reconcile?
Browse Our Archives
What Are Your Thoughts?leave a comment