10 Things I Didn’t Know About Neil deGrasse Tyson Until After Reading His Profile in the New Yorker February 10, 2014 Hemant Mehta

The upcoming issue of the New Yorker includes a lengthy profile by Rebecca Mead of astrophysicist and host of the upcoming “Cosmos” reboot Neil deGrasse Tyson. Unfortunately, the article is behind a paywall, but here are some of the more interesting nuggets of information I didn’t know (or didn’t think about) before reading the piece: 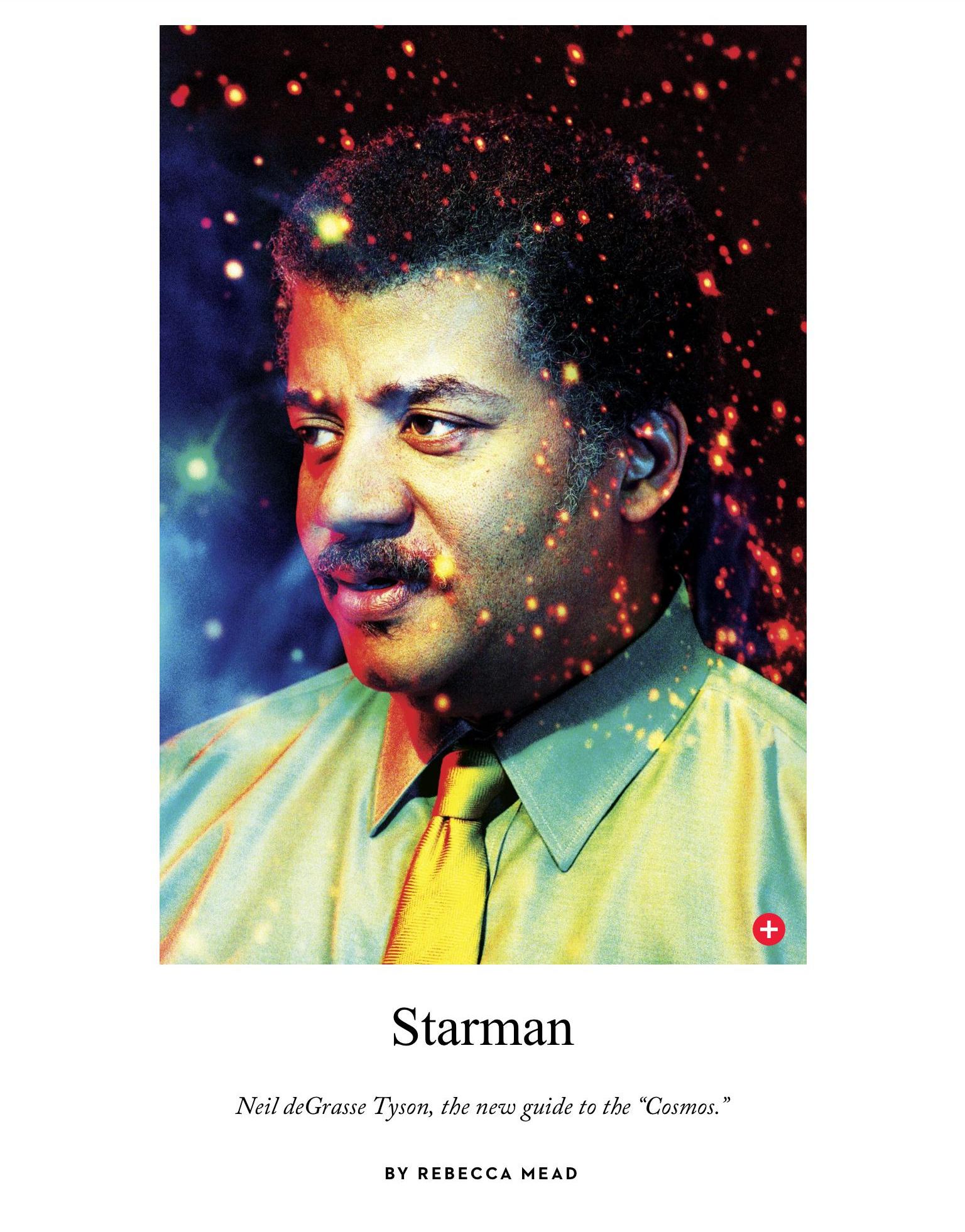 1) “Cosmos: A Spacetime Odyssey” will air on the same network that once perpetuated the idea that the moon landing was a hoax:

Recently, [Tyson] has been obliged to contend with the conspiracy theory that the landings were a government-sponsored hoax — a theory promoted, in part, by a widely seen television special broadcast by Fox.

2) You may already be reading Tyson’s next book online:

Tyson is considering compiling a volume of his tweets for publication.

3) Tyson is not only publicly apolitical, he schmoozes with people who tend to be seen as enemies of science:

[Tyson] was hosting a private sky tour in the planetarium dome — a prize won at a benefit — for the family of David Koch, the chemical-industry billionaire and conservative activist, who supports science museums and at the same time politicians who are skeptical of climate change.

4) Tyson is so publicly apolitical that he won’t criticize anti-science politicians:

Tyson refuses to take explicit political positions in public, or to criticize elected officials, even those who reject evolution; he would rather invest his energies in creating a more enlightened electorate.

5) Tyson gave up his religious faith before he became a teenager:

Tyson attended a Catholic Church as a boy, but he began questioning the Church’s tenets before entering his teens. When pressed, he calls himself an agnostic, but he resists labels, maintaining that atheism has come to imply activism.

Tyson attended public schools, and was not a distinguished student. He was social, and teachers criticized him for being inattentive.

7) He was urged by a grade school teacher to drop his interest in science because of his skin color:

At the age of eleven, Tyson spoke with a teacher at P.S. 81 about his fascination with astronomy. Tyson’s older brother, Stephen, who is an artist, recalls, “The teacher asked, ‘Why do you want to go into science? There aren’t any Negroes in that field. Why don’t you go into sports?'”

8) At one point, Tyson considered a very different career path:

In his memoir, [Tyson] reveals that he considered supplementing his income by working as an exotic dancer in a strip club, until he discovered that one dance routine would require him to wear, and ignite, as asbestos-lined jockstrap soaked with lighter fluid.

9) Tyson’s astronomical claim to fame is an unusual one:

Tyson, who wrote a book about the Pluto controversy, has achieved the peculiar status of being an astronomer famous for losing a planet, rather than for discovering one.

10) Before Fox, other networks had the chance to air “Cosmos”:

Ann Druyan, Sagan’s widow and a producer of the new series, says that other networks, including PBS, had a chance to air the new series, but none of them could top the budget or creative control that Fox gave them.

“Cosmos: A Spacetime Odyssey” will air in 180 countries beginning on March 9.