In a fiery essay about movie makers’ supposed bias against religious values, conservative author Fay Voshell hangs her case on the recent kerfuffle over a Christian song that was eliminated from Oscar consideration because one of the songwriters hadn’t played by the nominating rules. Somehow, that’s evidence of anti-Christian bigotry.

Voshell’s piece is interesting reading, which is not to say that it’s convincing, except to some of her commenters who say things like

It is time for a total boycott on every new Hollywood product. These degenerate atheist-marxists worship $$$ and themselves.

It’s no accident that a major fault line runs from Hollywood to San Francisco. At an appointed day the wrath will come. God is just. 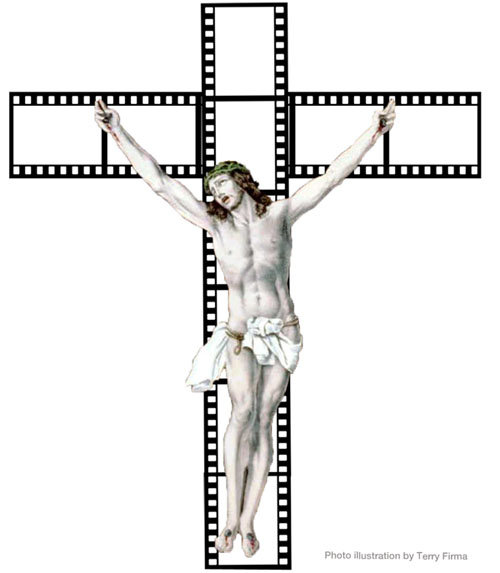 For her part, Voshell reminisces a little too fondly about the infamous Hays Code, a set of binding censorship guidelines that ruled American movie-making from the 1930s until 1968.

The Hays Code got its start when, in an effort to stave off dozens of movie-censorship bills that various states threatened to impose, Hollywood studios decided to clean up their act, and hired a censorship czar — Presbyterian elder Will H. Hays. A classic moralist with the almost inevitable propensity to ban things that offended him, Hays soon came up with enforceable rules that were roughly as awful as anything legislators had had in mind.

Among the Hays Code prohibitions were scenes involving mixed-race romantic relationships, and using the words “God,” Lord,” “Jesus,” ” Christ,” “hell,” and “damn” in any context except that of a religious ceremony. Also forbidden: ridicule of clergy; making “evil” appear alluring; any nudity, even in silhouette; and moral ambiguity (“no plot should be constructed as to leave the question of right and wrong in doubt or fogged”).

That’s a lovely piece of work, isn’t it? But there’s more, and Voshell quotes it with a hint of nostalgia:

[I]n the case of impure love, the love which society has always regarded as wrong and which has been banned by divine law, the following are important:

I thought that maybe “impure love” referred to same-sex attractions, but such horrors probably never entered Hays’ mind, and he half-clarified that the phrase concerns “the love of man and woman forbidden by human and divine law” (presumably he meant extra-marital sex).

Anyway, Voshell argues that that excerpt, though “quaint,” shows exactly “just how matters have been turned topsy-turvy.”

The divine, once evoked as a guideline for films, is now considered so toxic that references to it even in song must be banned.

Stop right there. The song she’s referring to wasn’t “banned.” The Academy doesn’t have the power to “ban” anything, nor is it likely that it would if it could. Voshell isn’t the only one: the fib is being propagated enthusiastically in Christian-conservative circles. For instance, yesterday, Dan Wooding, a writer for the Christian Post blog Crossmap, spread the same falsehood.

In fact, [for Hollywood,] it is absolutely necessary to ridicule anything that refers to the divine, including love, impure or otherwise.

Right. Like Frozen, the highest-grossing Disney animated movie ever, which is rich in Christian imagery and plot lines. Or like Ender’s Game, which borrows from the story of Joseph, and whose main character is like Christ in significant ways.

The establishment of a new code that is essentially anti-religion, especially regarding the Christian religion, should come as no surprise.

She again got a little carried away there, to put it charitably; there is no “new code.” Voshell means instead, I guess, that Hollywood’s string pullers don’t do a lot of overt pandering to Christians.

If I had to write a rebuttal, I’d probably come up with something along these lines:

[Hardcore Christians] long ago repudiated film as a legitimate art, considering Hollywood and the new medium of film as the Devil’s playground. Many fundamentalist and evangelical churches put making and watching films on their sin lists, along with attending theater, going to dances, and smoking cigarettes.

Many Christians resorted to self-exile, consigning themselves and their worldview to cultural backwaters. … Christian advocates of film as a legitimate and powerful art form were few and far between. When Christian films finally did appear, most were cringe-worthy. Filled with simplistic and overt preachiness, God-awful plastic personae, and trite story lines, they failed to captivate even the Christian audiences they were supposed to attract.

You know who wrote that? Fay Voshell did. In the same essay.

It’s admirable of her to present that side of the equation. Well done. But then she follows it up with:

In a very real sense, Hollywood became an enemy of Christians, most of the time seeing and portraying them as Elmer Gantry types who were at heart smarmy fakes, hypocritical to the core. When they did films with Jewish or Christian themes, most were bastardized version of Old Testament stories or portrayals of a sickly, weak Christ.

[T]he left-leaning Hollywood elite are deaf, blind, and dumb — trapped by their own stereotypical templates, and like pigs before which pearls are thrown, they trample anything beyond their ken into the mud.

Gimme a break. The thing that movie studios care about above all else is making money. If they saw any chance at all to serve a Christian audience with bona fide Bible-y blockbusters that bring in billions of dollars, we’d see Hollywood churning out religious productions like a freakin’ assembly line.

Manifestly Christian movies, with few exceptions, fail at the box office mostly because of the phenomenon that Voshell herself describes aptly, but assumes wrongly is a thing of the past. Remember? We’re talking about

… simplistic and overt preachiness, God-awful plastic personae, and trite story lines [that fail] to captivate even the Christian audiences they [are] supposed to attract.

For instance, this past year brought us Christian flicks like Grace Unplugged, the Christmas Candle, and Home Run. They’re films with solid budgets, professional crews, and serious cinematography, not amateurish tripe like the Lock In or D-movie fare like Final: the Rapture.

Yet, according to Box Office Mojo, Home Run, the Christmas Candle, and Grace Unplugged made chump change — about $7,600,000 combined.

Jesus followers like to complain that Hollywood ignores them. In truth, notwithstanding occasional blockbusters like Frozen and The Passion of the Christ, it would appear that American Christians love watching Christian fare about as much as they love reading their Bibles.

February 9, 2014
Pastor Running an Online Church for the Deaf Comes Out as an Atheist
Next Post

February 9, 2014 Atheist in the Bible Belt: A Documentary
Browse Our Archives
What Are Your Thoughts?leave a comment