Within hours of University of Missouri defensive lineman Michael Sam, an NFL prospect, coming out as gay, Fox News’ Todd Starnes had an apology for his readers: 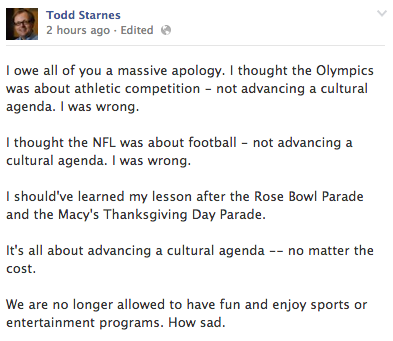 I owe all of you a massive apology. I thought the Olympics was about athletic competition — not advancing a cultural agenda. I was wrong.

I thought the NFL was about football — not advancing a cultural agenda. I was wrong.

I should’ve learned my lesson after the Rose Bowl Parade and the Macy’s Thanksgiving Day Parade.

It’s all about advancing a cultural agenda — no matter the cost.

We are no longer allowed to have fun and enjoy sports or entertainment programs. How sad.

As if it’s a bad thing to expose and fight against the rampant homophobia in Sochi, where a national law makes it “illegal to disseminate information [about homosexuality] to children even if it merely shows that gay people are just like everybody else.”

As if it’s a bad thing for the leaders of a sport that’s virtually synonymous with “manliness” to issue a statement that includes the line, “Any player with ability and determination can succeed in the N.F.L.” suggesting that they will not hold a player’s sexual orientation against him or allow any bullying or intimidation because of it.

Even Christians who says they “hate the sin but love the sinner” should be disgusted by the Russian officials’ treatment of LGBT individuals and ready to embrace the NFL’s claim that they just don’t care about players’ sexuality.

But Starnes thinks treating people like they’re human beings will ruin his fun and enjoyment.

February 9, 2014
Atheist in the Bible Belt: A Documentary
Next Post