Just (Not) Curious: When Creationists Ask Questions, Are They Interested In the Answers? February 8, 2014 Terry Firma

Just (Not) Curious: When Creationists Ask Questions, Are They Interested In the Answers?

For the past few days, ever since I saw the photos of these Creationists and their questions (courtesy of Buzzfeed’s Matt Stopera), I’ve been thinking about what it means to be curious. 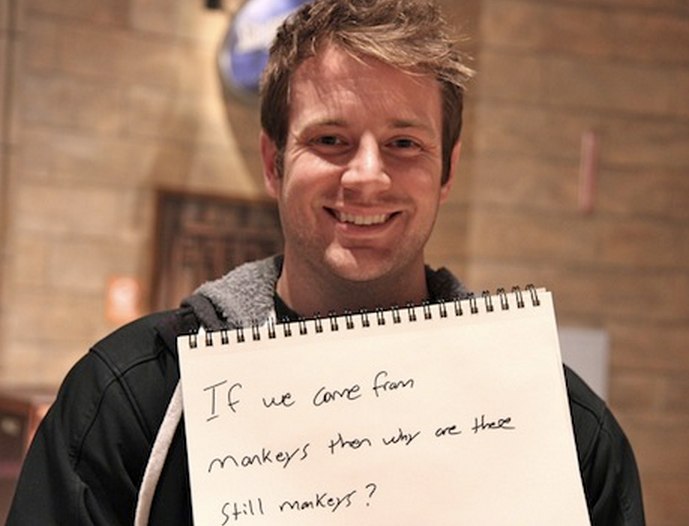 As science journalist Philip Ball reminds us in his 2013 book Curiosity: How Science Became Interested in Everything, people of faith have often had a fractured relationship with curiosity.

The central problem with curiosity was that it was thought to be motivated by excessive pride. The accumulation of pointless learning ran the risk not that one would become another Lucifer, but that one would primp and preen rather than bow one’s head before the Lord. …

There was nothing frivolous or hedonistic about wonder. It instilled awe, reminding us of our powerlessness and insignificance before the glory of God. That is why wonder in the face of nature’s splendour was seen as the educated response, and a willingness to believe in marvels and prodigies was not only praiseworthy but virtually a religious duty. Curiosity, like scepticism, was a sign that you lacked devotion and faith.

That’s in the past now, mostly, and I’m thankful. Our culture has gradually come to celebrate curiosity, spawning countless transformative inventions and innovations.

Curiosity is always preceded by questions, and we’ve been practically trained to love questions. We even have a near-universal saying about them that is meant to encourage asking anything at all without embarrassment: There’s no such thing as a stupid question.

In The Demon-Haunted World, Carl Sagan used the phrase like this:

“There are naive questions, tedious questions, ill-phrased questions, questions put after inadequate self-criticism. But every question is a cry to understand the world. There is no such thing as a dumb question.”

It finally occurred to me that asking questions is not at all the same as displaying curiosity. Curiosity implies wanting to know. Some questions, however, are posed to achieve almost the opposite. They are ideological stands, markers of obstinacy presented under the guise of open inquiry.

Look at those photos and at the questions the Creationists scrawled on that sketchpad. I don’t want to be harsh, but I’m not sure that what I’m seeing is curiosity.

“How do you explain a sunset if [there] is no God?”

“If we come from monkeys then why are there still monkeys?” 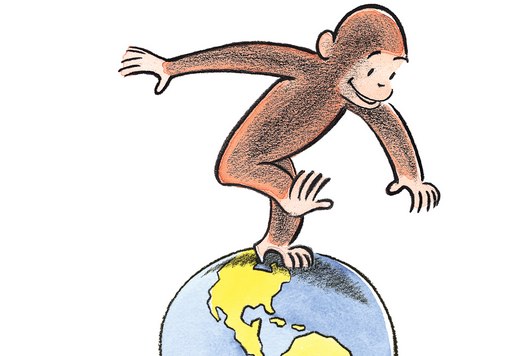 There, that’s what I mean. Surely these are not questions driven by genuine curiosity. Rather, they’re hoary conservative-Christian talking points that happen to have a question mark at the end. I’ll give the gentleman who wrote the monkey question one thing: his query is a step up from the even more hackneyed and headdesk-worthy “Were you there?”

If you want pressing questions answered conclusively, what do you do? Visit the local library? Thumbs up. Ask a scientist on the Internet? High five. Spend ten minutes clicking on Google links, and reading? Smart move. Order a non-fiction book from Amazon? Love it.

If you’re curious, you’ve by definition already removed your noggin from your large intestine. You’re ready to do some learnin‘. And if you are, and you have a question about our ape ancestors, you can get it answered. Just like that, almost effortlessly. This is what I got after ten seconds on YouTube. That’s evolutionary biologist Richard Dawkins telling you, monkey-question man, precisely what you (purportedly) wanted to know.

My bleak suspicion is that many of the people in the photos have not actually attempted in earnest to get past a sixth-grader’s understanding of the issues. If they’d read just the first few chapters of Evolution For Dummies even once, rather than the first chapter of the Bible over and over, their questions would already have been answered. Their questions would be ex-questions (cue the dead-parrot sketch).

If I ask something dumb, it makes me look stupid for a few minutes. But if I don’t ask it at all, I’ll stay stupid my whole life. That’s an easy choice, so I ask dumb questions all the time (luckily, Google’s search engines are very discreet).

I think that anyone who utters, in Sagan’s words, “a cry to understand the world” deserves more respect than guffaws.

But asking questions without an apparent desire to find out the answers? That’s a little curious. 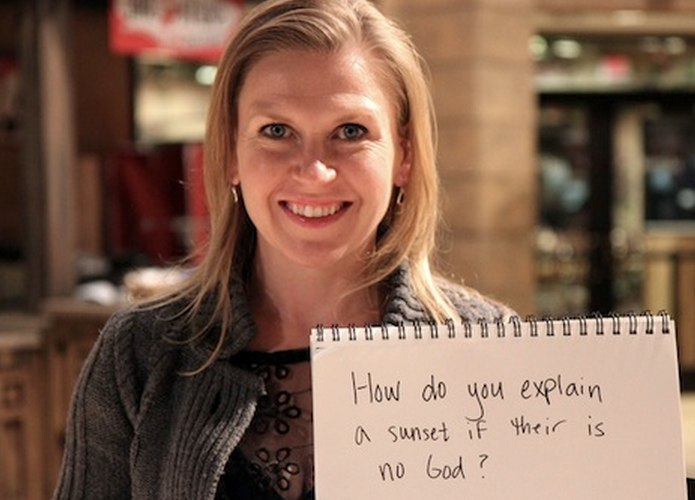 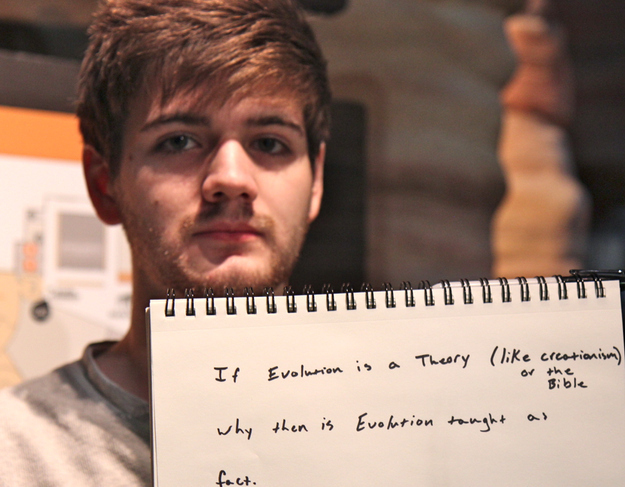 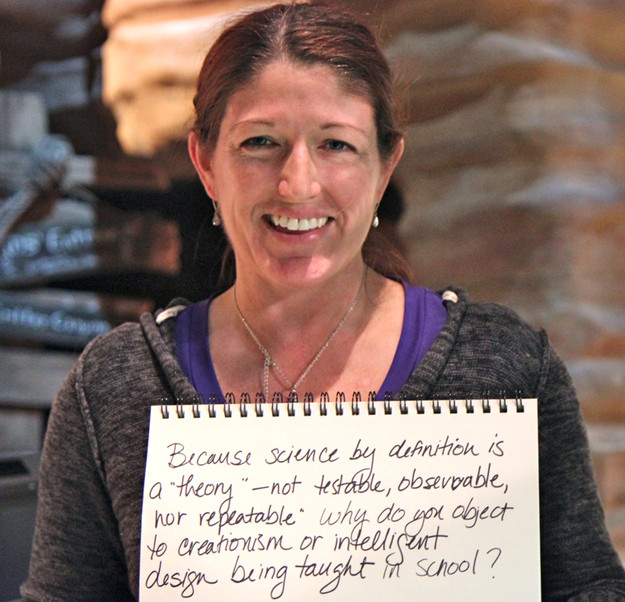 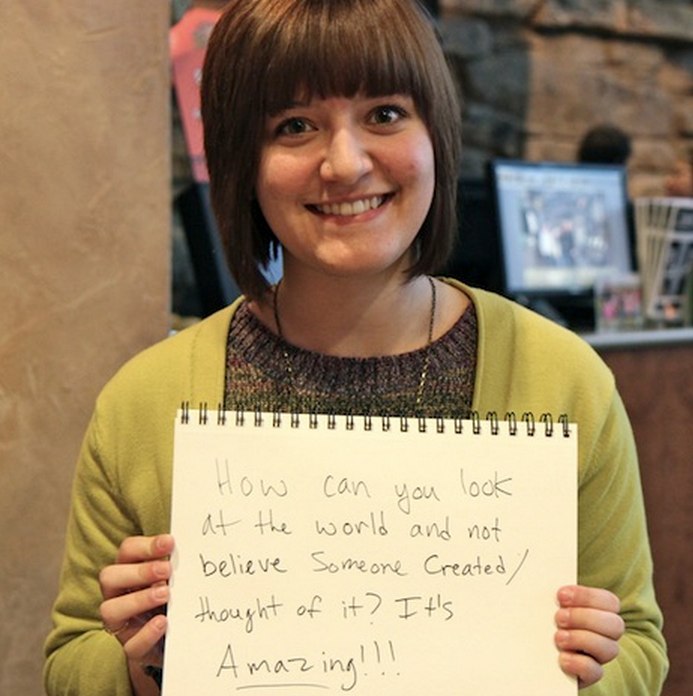 February 8, 2014
Finally, a New Kind of Debate About 'Under God' in the Pledge of Allegiance
Next Post