An ESPN Reporter Giggles When NBA Star Kevin Durant Gives Credit to God in Interview, and the Internet Goes Crazy 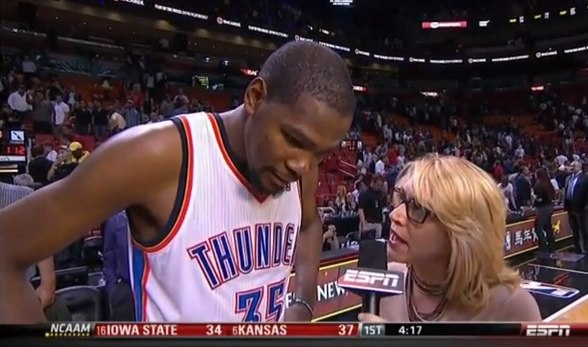 Durant: God. That’s all I can say. Jesus Christ.

Burke: [Laughs] Okay, thank you. You had nothing to do with it?

Did you hear what fellow Patheos blogger Rebecca Hamilton heard? Hamilton is upset about Burke’s giggle at the end, and quickly plays the Ma-they’re-mocking-us card.

Watch, and get a look at what Christians face more and more, even when they are famous athletes being interviewed by “professional” reporters of major cable networks.

Me, I heard a friendly interviewer who was surprised by Durant’s aw-shucks humility, and who asked in just about the most non-confrontational way possible if the athlete was sure he didn’t want to take a sliver of credit for what he’d done on the court.

The sports blog Awful Announcing predicted that Burke would catch flak for her laughter, and did she ever. By the time Hamilton joined the party, Burke had already been raked over the coals on Twitter and elsewhere.

Some of the responses:

“Doris Burke laughing when Durant said ‘all credit goes to God’ really bothers me. Poor reporter overall and shouldn’t be employed by ESPN.”

“Excuse me Doris Burke but what the heck was your response ‘that’s it?’ supposed to mean? Yes, Jesus Christ IS IT.”

The implication that Burke is some hateful heathen turned out to be wide of the mark when she clarified, in an e-mail to media writer Mel Bracht:

He just took me by surprise with his reaction — not because he’s a believer, I’m a believer. It was an incredible demonstration of humility in the context of what has been a truly spectacular stretch.

OK, so can we all simmer down now? Thanks.

Last word goes to the Monkees:

February 8, 2014
15 Years Ago, the Intelligent Design Movement's 'Wedge Document' Was Exposed
Next Post

February 8, 2014 Finally, a New Kind of Debate About 'Under God' in the Pledge of Allegiance
Browse Our Archives
What Are Your Thoughts?leave a comment